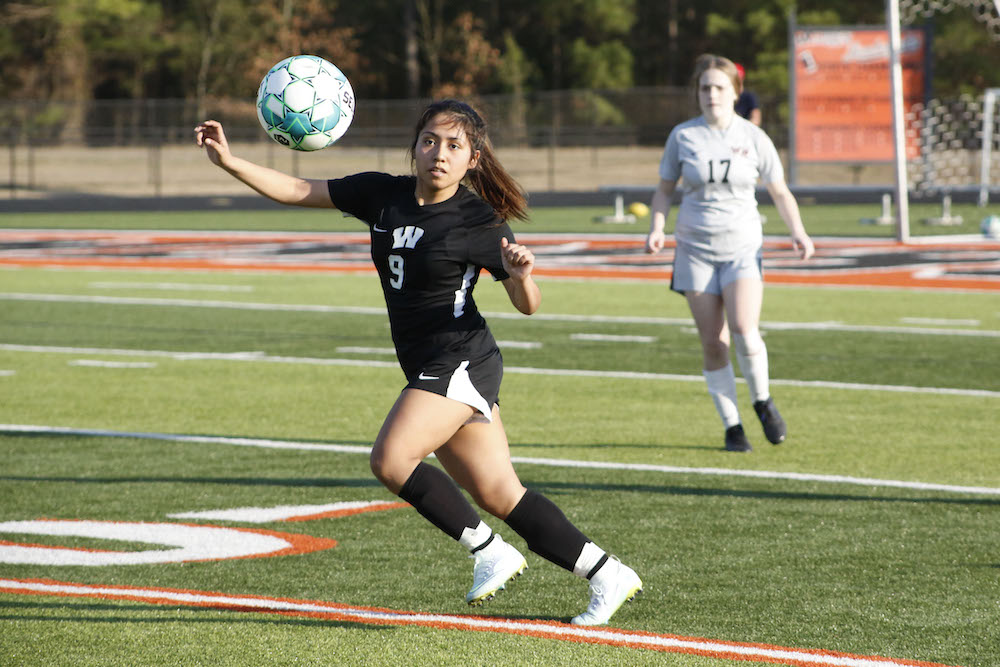 WARREN, Ark. – Day one of the Southeast Arkansas Soccer Jamboree took place Friday, March 4, 2022, with the Warren Lady Jacks taking part in two games and coming away with a their first win of the season.

After the initial JV men’s game that kicked off the multi-club jamboree, Warren’s Lady Jack Soccer Club took to the pitch in game two against recently played opponent White Hall.

This remained scoreless through the opening twenty minutes of play. In the twenty-first minute White Hall tested the Jack defense seriously for the first time. Goalkeeper Valerie Navarro however was up to the task, parrying a shot driven at her with pace.

Lady Jack right winger Leslie Vega nearly put Warren in front on the twenty-eight minute mark. Vega fired a shot with a hard right foot from just inside the left side of the penalty box. The shot beat the Bulldog keeper, but flew just inches wide right of the post.

The tournament format uses ten minute reductions in half length, so the halftime whistle came at thirty minutes.

After the break, White Hall appeared to go in front with the first goal of the match, but the flag was up on the far side for offside.

That was a warning for things to come. In the forty-seventh minute the breakthrough came for White Hall. They built up sustained pressure in the final third, and eventually poked in a loose ball to take the lead.

It would be the only goal of the game. At full-time White Hall was the victory by the final of 1-0 over Warren.

Hungry for goals, Warren’s Ladies took the pitch for the evening varsity match against the Lakeside Beavers of Lake Village.

Warren looked dangerous from the very first whistle. On the eighteen minute mark Mellisa Chavez took aim at the Lakeside goal, but her shot was right at the keeper.

Just six minutes later the Lady Jacks earned their first goal of the day. It came courtesy of striker Tessa Andrus. She received a ball just outside the penalty box in a central location, spun her defender and found her self in a race to be one-on-one with the keeper. Andrus stayed calm and slotted the ball into the left corner of the net to give Warren a one goal advantage.

Winger Leslie Vega, who’s quickly becoming a nightmare for defenders, doubled the Lady Jack lead in the thirty-second minute. She broke through clear on goal and poked a shot left of the keeper to make it 2-0.

Four minutes later the Jacks won a free kick about thirty yards out. Bailey Herring took it and launched a dangerous ball near the left side of the goal. A Lakeside center back try to clear it, but missed kicked, putting into her own net for an own goal.

The win is Warren’s Lady Jacks’ first win of the 2022 season. They move to 1-2 on the year. Warren’s girls have completed their slate of games in the Jamboree, but the Warren Lumberjack men’s team will have a couple of games Saturday, March 5, the first starting at 10:00 a.m.

Top photo: Warren’s Leslie Vega takes possession of the ball after a throw-in during the Warren vs. White Hall match Friday.