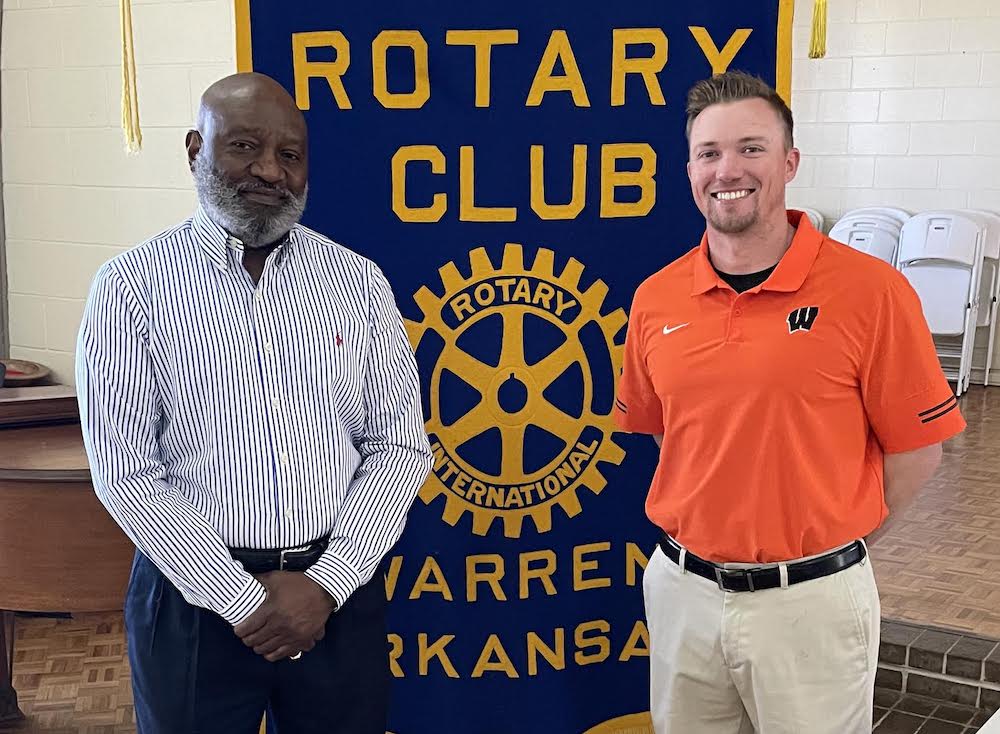 The Rotary Club of Warren met Tuesday, March 1 at First United Methodist Church for their weekly meeting. Rotarian Andrew Tolbert presented his program of Warren High School baseball coach Trent Wilson. Wilson touched on the team’s 16-0 season-opening win over Hampton Monday night before talking about the upcoming schedule, which features a game against Nashville on Thursday in the Ralph Gross Memorial Tournament. The team is also heading to the Pulaski Robinson Invitational later in March. Coach Wilson continued with some comments about the strength of the conference and how every team returns a lot of starters in a league that features Magnolia, Camden Fairview, Watson Chapel, Monticello, Crossett, Star City, and Hamburg along with Warren. After touching on this year’s squad and a review of last year’s team, Wilson talked about his past, which included playing both football and baseball at SAU for a couple of seasons before he transferred to Henderson State. Unfortunately an injury ended his playing career, but he talked about his previous coaching stops and what led him to Warren. He was the baseball coach at Ouachita High School and led the Warriors to a 2A State Championship in 2015. Coach Wilson also had stints at Fouke, Mena, and Arkadelphia before he took a job at El Dorado High School. However, he was only there a short time before Coach Hembree hired him to the be the head baseball coach and assistant football coach at Warren prior to the 2020-21 school year. Wilson touched on each stop and spoke about the positive experiences and challenges they presented. In closing, Coach Wilson mentioned how much he enjoys being at Warren and is looking forward to the rest of the season.