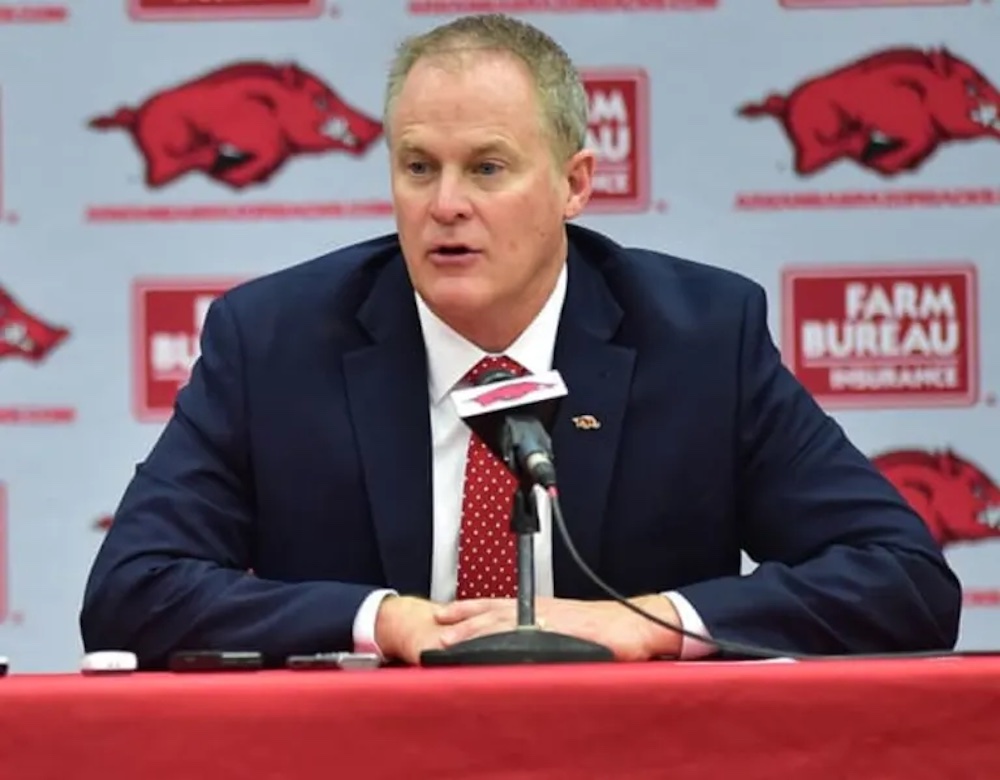 FAYETTEVILLE, Ark. – University of Arkansas Vice Chancellor and Director of Athletics Hunter Yurachek is a 2021-22 Football Bowl Subdivision (FBS) Cushman & Wakefield Athletics Director of the Year recipient it was announced on Tuesday by the National Association of Collegiate Directors of Athletics (NACDA). Yurachek and the three additional FBS honorees will be formally recognized during NACDA’s 57th Annual Convention at the Mandalay Bay Resort in Las Vegas on Tuesday, June 28.

“Hunter is very deserving of this recognition. During his five years as vice chancellor and director of athletics, Hunter has guided the Razorback program to new heights. Under Hunter’s leadership, our student-athletes have set new records, won NCAA titles and SEC championships and posted one of the most successful sports years in Razorback history,” Charles Robinson, interim chancellor for the University of Arkansas said. “Even more importantly, Hunter has consistently prioritized the academic goals of our Razorback student-athletes, who have held a collective 3.25 GPA during his tenure. Preparing students for success both on the field and in the classroom is a foundational part of directing a top-notch athletic program, and Hunter has done a wonderful job of establishing a strong culture of student success.”

Yurachek is in his fifth year as vice chancellor and director of athletics at the University of Arkansas after being announced as vice chancellor and director of athletics on Dec. 4, 2017. He recently signed a new agreement that will extend his tenure in Fayetteville through at least June 30, 2027. Yurachek is also a finalist for the Sports Business Journal Athletic Director of the Year, as was announced earlier this week.

“While I am humbled to be recognized by my peers with this award, the success of our program is truly a tribute to our remarkable student-athletes, coaches and staff as well as the extraordinary support of our Razorback Foundation members and fans,” Yurachek said. “By embracing a shared commitment to our mission of developing champions and Razorbacks for Life, we have provided our program the opportunity to achieve record-breaking athletics success while also adding more than 100 student-athletes a year to Senior Walk, as graduates of the University of Arkansas. I am grateful for the continued support of Dr. Don Bobbitt, Dr. Charles Robinson and all those who help lead our institution. It is an honor to be your Director of Athletics and I look forward to the amazing things still to come for the University of Arkansas and Razorback Athletics.”

In 2020-21, Razorback Athletics turned in the most successful collective year in school history, including a program-best eighth place finish in the Learfield IMG Directors’ Cup. Arkansas’ previous best finish was 14th in the competition that tracks the nation’s most successful intercollegiate athletics programs. The Razorbacks won an NCAA title (Women’s Indoor Track & Field), earned eight Top-10 NCAA finishes and a remarkable 10 SEC regular season and tournament championships, including SEC triple crown sweeps in both men’s and women’s cross country & track and field, a second-straight soccer regular season crown, the program’s first softball regular season title and a baseball regular season and tournament championship. Arkansas’ championship total led the league and doubled the next closest SEC program. In addition, men’s basketball advanced to the Elite Eight for the first time in more than 25 years.

Meanwhile, Razorback student-athletes combined for a 3.25 GPA and 104 student-athletes graduated from the University of Arkansas. A multi-million-dollar renovation of the Randal Tyson Track Center was completed, while brand new facilities, including the $27 million J.B. and Johnelle Hunt Family Baseball Development Center and the $15 million Frank O’Mara Track and Field High Performance Center were constructed.

The many accomplishments came despite the challenges of dealing with a global pandemic. With more than 28,500 COVID-19 tests conducted, Razorback Athletics had a positivity rate of less than one percent and was not the cause of an event cancellation in any sport due to COVID-19.

Yurachek’s leadership is also making a difference within Arkansas, the SEC and throughout intercollegiate athletics. Arkansas Governor Asa Hutchinson named Yurachek to the Governor’s Economic Recovery Task Force, to help guide state reopening in the wake of COVID-19. In April 2021, Yurachek was named to the NCAA Football Oversight Committee, after previously serving on the NCAA Football Competition Committee

In the 2021-22 academic year, Arkansas has continued its championship momentum with an outstanding fall semester, winning three Southeastern Conference championships (men’s and women’s cross country, soccer) and winning a New Year’s Day bowl game (Outback Bowl) in football for the first time since 2000. The Razorbacks ranked No. 8 in the final fall standings of the Learfield Directors’ Cup, the highest of any SEC program.