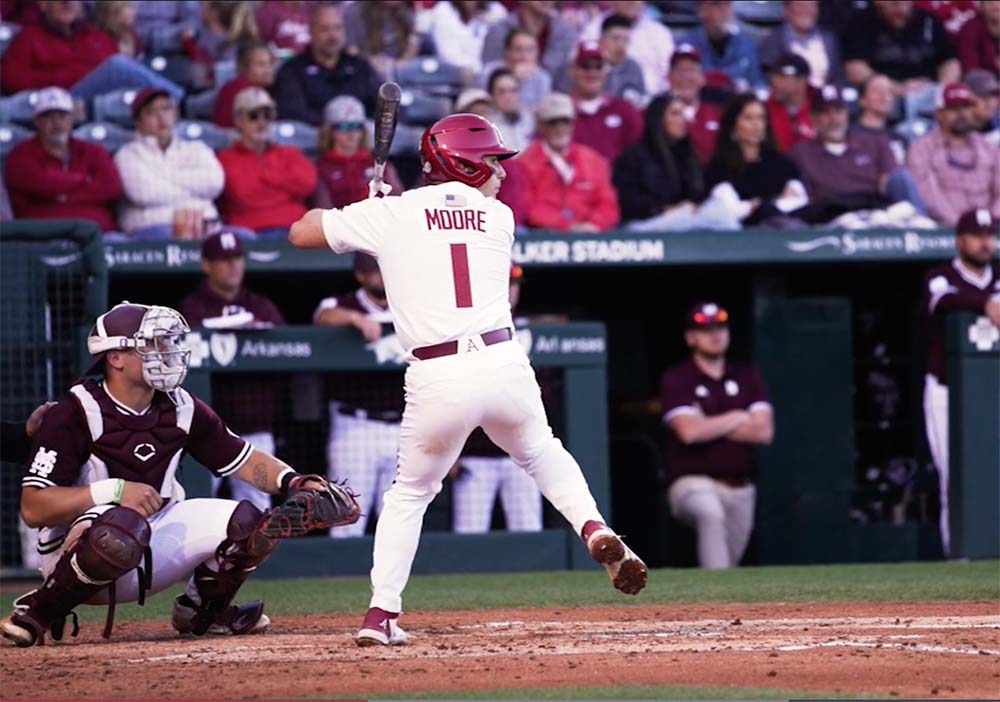 FAYETTEVILLE, Ark. – No. 2 Arkansas’ bid for a series sweep came up just short as Mississippi State prevailed, 5-3, in 12 innings on Sunday afternoon at Baum-Walker Stadium.

Despite the loss, which snapped the Razorbacks’ eight-game winning streak against the Bulldogs (17-12, 4-5 SEC), Arkansas stands at 21-5 overall and 7-2 in SEC play through the first three weekends of league play.

Sunday’s series finale featured five solo home runs as the ball was jumping out of the park on a windy afternoon. Mississippi State staked an early 2-0 lead with solo shots in the top of the first and third, but Arkansas struck back with two blasts of their own.

Zack Gregory’s second home run in as many days cut the Razorbacks’ deficit to one in the third before Braydon Webb socked a game-tying solo shot in the fourth.

The Bulldogs reopened a one-run lead with a solo homer in the top of the sixth, but the Hogs fought back to tie it in the bottom half of the frame. Brady Slavens drove home Chris Lanzilli from third with a sacrifice fly to center, evening the game at 3-3.

Arkansas and Mississippi State proceeded to exchange zeroes for the next five innings, thanks to lights-out performances from the bullpen. Razorback true freshman and Hernando, Miss., native Brady Tygart fanned a career-high seven in relief, dominating the Bulldogs over his career-long 3 2/3 innings.

Tygart’s outing backed up a strong showing from Arkansas starter Jaxon Wiggins, who struck out five over five innings of four-hit, two-run ball.

The Razorbacks, who finished the afternoon 0-for-13 with runners in scoring position, spoiled a bases-loaded opportunity with one out in the ninth to send the game to extras. After a scoreless 10th and 11, Mississippi State scratched out two runs in the 12th and retired Arkansas in order in the bottom half of the frame to grab a 5-3 win and salvage the series.

Arkansas will host UCA at home on Tuesday, April 5, before taking off for Gainesville, Fla., to clash with Florida in a three-game set this weekend. First pitch against the Bears is set for 6 p.m. on SEC Network+.