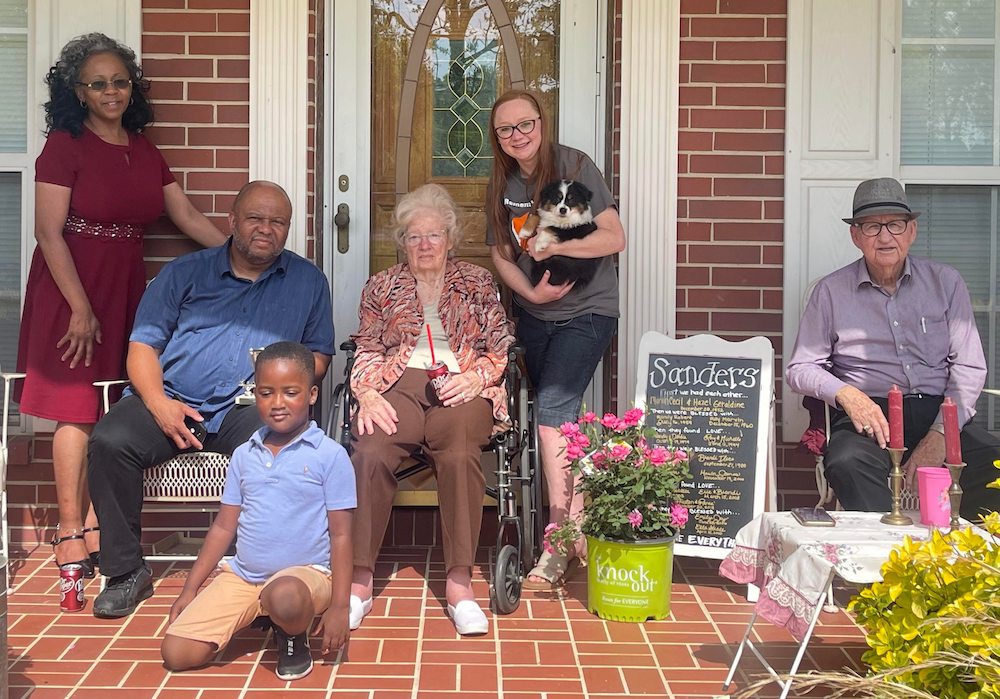 In the 1980s Geraldine Sanders taught at Brunson Elementary School in Warren. Over her years as an educator, she blessed the lives of many young people to come through the Warren School District. Now 86, Mrs. Sanders says it was she who was blessed by her years of service and the oppurtunity to work with children in her community. Although long since retired, little did she know, at least one blessing of being an educator was still on the horizon.

Several months ago after work, Mrs. Sanders’s granddaughter, Brandi Green, now a counselor at that same Brunson Elementary School in Warren, went to visit Geraldine. While Geraldine is dealing with the early stages of dementia, some days are better than others. “Some days she can recall so many memories,” says Green.

On this particular day, Mrs. Sanders was ready to recall a memory of a student which she hadn’t seen in nearly four decades. “She asked me to walk with her to her sewing room where she displays her many precious what nots she has collected over the years,” said Green. “She brought me a silver trophy,” that day. The trophy was labeled. It was from Sanders’s class and said “field day trophy,” and included the year. The problem was that it never made it to the student it was to be awarded to so very many years ago.

In the shuffle of the end of year activities, the little boy the trophy was intended for didn’t receive the trophy. Sanders told her granddaughter that she packed it away for the summer hoping to present it to him when he returned for the start of his sixth grade year at Brunson.

However, that summer Sanders’s husband took a job as a professor at a small Christian college in Oklahoma City. The family relocated, and with her the trophy went, tucked away in her belongings.

Since the 1980s, the trophy has stayed with Sanders everywhere she has lived. It’s always had a special place on a shelf no matter the home. Sanders made a vow to herself that she would keep the trophy until she saw the little boy again.

Sanders asked her granddaughter, Brandi Green, to help her locate the little boy. “She said it was not hers, that she had only been the trophy’s keeper over the decades,” says Green.

Green agreed to help with the search. At the time, Sanders didn’t recall the young man’s name, only that his first name began with an m and his last name was three letters, similar to Von. She remembered him as a walker to school each day. She could even remember what direction he travelled to go home.

As Green went to work, she hit a roadblock when the years she was searching didn’t correlate to the specifics of the name in an old yearbook. Green then enlisted the help of a student at Brunson. After a lengthly search of yearbooks from nearby years, the two found a name which was a possible match. Green took a photo of the yearbook picture to her grandmother for confirmation.

“This is the young man,” she said.

This past Sunday, April 24, 2022, after nearly four decades, Mrs. Geraldine Sanders presented the trophy to the little boy, Michael Yon, now of Texas. Yon is retired from the Air Force, having served around the world in several states, as well as in Korea, Australia, and several other countries. He still holds a track record at Warren High.

As a token of thanks for keeping his trophy in safe hands for so many years, Yon brought Sanders a pink rose. The two enjoyed a nearly two-hour visit at Sanders’s home in New Edinburg. Before Yon left, the families prayed to give thanks to God for their reunion and Yon’s safe travels home to Texas.

Editor’s note: Saline River Chronicle would like to give a special thanks to Brandi Green for letting us chronicle this beautiful story.