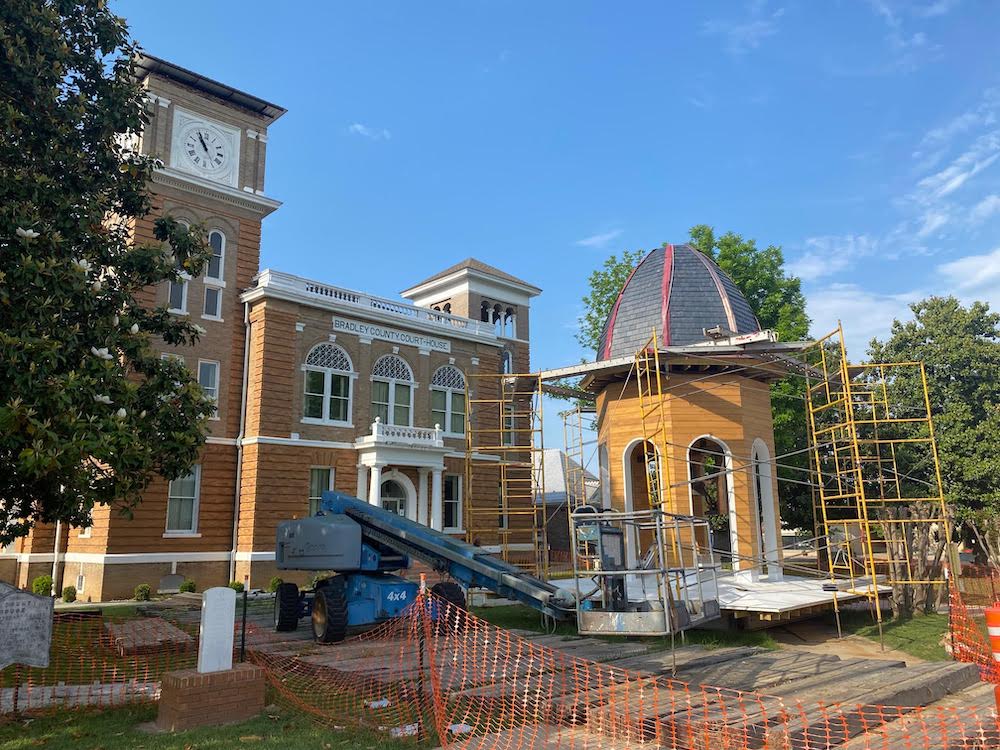 Bradley County Judge Klay McKinney told the Quorum Court Monday evening, May 16, that work is at somewhat of a standstill on completing the repairs and renovations to the Courthouse Bell Tower. Some unexpected issues have arisen and decisions on how to finish the work are under consideration by the contractor and the State of Arkansas, which is providing grant money for the project. The Judge indicated he has not been updated over the past three weeks and is concerned that the work will
not be completed by Pink Tomato Festival time as he had hoped. If the job is still ongoing, the Judge said the Courthouse grounds will be blocked off as needed to an absolute minimum. He said that is the best that can be done.

After a question by Justice Bobby Hargraves, the Judge talked about a planned waste to energy/recycling plant to be constructed in Chicot County that will be able to take all of the County’s class I solid waste and some other waste cheaper than having it landfilled. Other counties and cities in Southeast Arkansas and beyond will be able to utilize the facility. The plant will be privately owned and operated. More details will be forthcoming. Matters such as transportation are under discussion.

Leslie Huitt, Interim Administrator of Bradley County Medical Center, updated the Court on plans to secure a million dollar grant from the United States Department of Agriculture to assist the Hospital in buying new beds, updating the surgery section of the hospital, adding digital signage, and making other improvements. The grant will require a 45 percent match by the hospital, which will allow the board to stretch the hospital sales tax money further than usual. She went on to say the board is working on updating the master plan of the Hospital.

Next, the Court adopted ordinance 774 setting up a plan for families in the County with five or more members to get a second garbage container for use if needed, and if they are willing to pay a higher fee. The County Judge will have the authority to determine who needs and receives a second container. Cost to the user will be an additional $13.00 per month on their bill in addition to the current bill.

Finally, the Court voted to buy a piece of property just outside the Warren city limits for future use if needed. The Judge told SRC there are no plans for use at this time, but the site will have access to Warren sewer in the future. Seven of the nine JPs were present.

All other reports, including financial and the Sheriff’s Office were reviewed and approved.