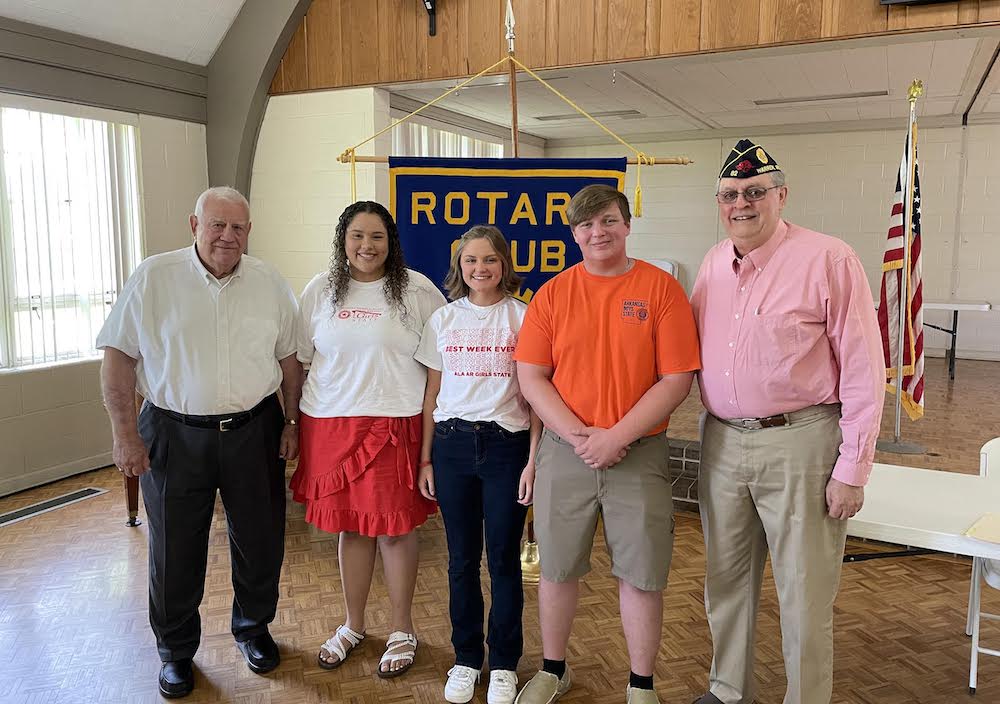 The Warren Rotary Club met for its weekly meeting Tuesday, June 14 at First United Methodist Church. Rotarian Dr. Bob Smalling presented the program, which consisted of Arkansas Girls State Representative Raven Harris and Emma Mann of Warren and Arkansas Boys State Representative Weston Gavin. Dr. Smalling spoke briefly about the history of Boys State and Girls State in Arkansas and the role the American Legion plays in sponsoring the programs. He also spoke about the American Legion Martin-Tate Post 82 located here in Warren. He also thanked the sponsors, including the Rotary Club, for helping pay the attendance fees for 10 students, six from Warren and four from Hermitage. The costs have risen each of the last few years and he mentioned some students from other school districts must pay their own way to go so he was very thankful we have the support in Bradley County to pay for the costs. Once Dr. Smalling concluded Gavin, Mann, and Harris all spoke for several minutes about their time at Boys State and Girls State. Boys State was held at UCA May 30-June 3, while Girls State was held over the same dates at Harding University. After speaking about their experiences all three answered a few questions from the crowd. Gavin said he was already interested in getting into politics, but this experience helped that grow stronger, while Mann and Harris both said they consider it an option as well. Mann said one of her biggest takeaways was that women belong in politics. Harris mentioned that while running for office you only got 30 seconds to talk about yourself, which is very difficult. All three said the speakers at both events were excellent, they all felt like they had improved their public speaking skills, all formed lifelong friendships, and all three were sad to see the week come to a close.