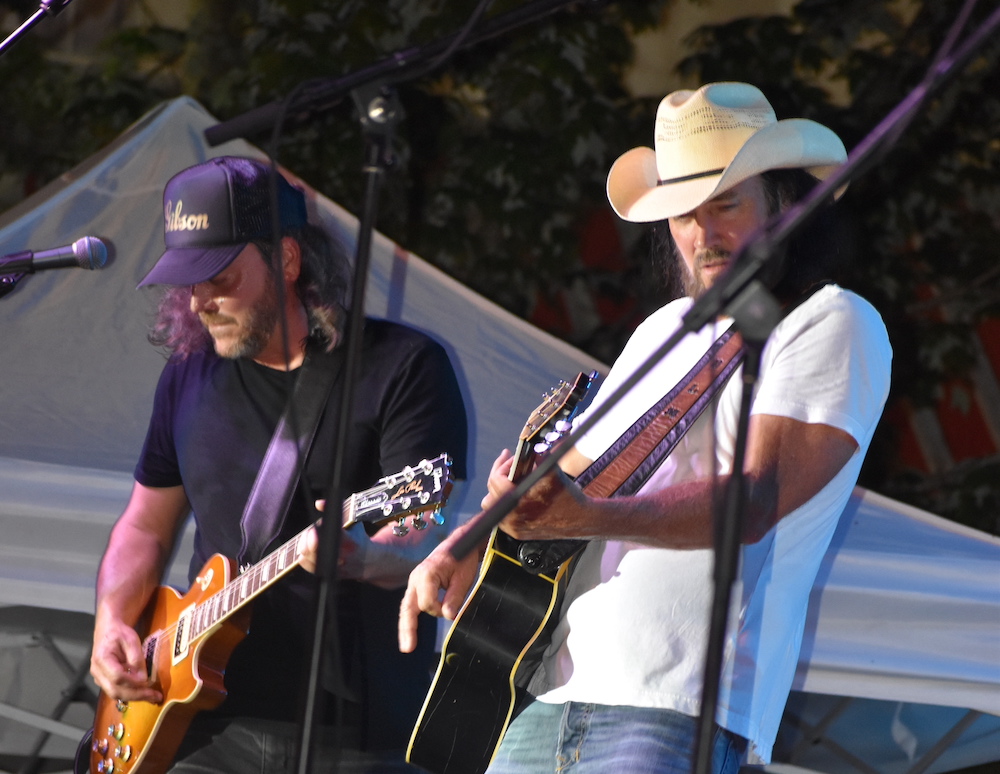 The 66th annual Bradley County Pink Tomato Festival came in with a bang long before the last fireworks exploded.

Hurricane-strength winds blew through the Arts and Crafts shed where over 80 vendors were assembled, sending tables flying and torrential rain. Booths were literally ripped apart but the vendors soon recovered. Several tents with other vendors around the courthouse square were also flattened. Several trees were uprooted and tree branches came crashing down, with some power outages and even phone disruptions at Warren Police Department.

Story and Photos by Tim Kessler

A brief rain shower also greeted the beginning of the parade on Saturday, soaking contestants. The rain showers sent temperatures plummeting only to turn steamy in the afternoon.

To show that this was truly a countywide festival, Mayor Denisa Pennington of Warren, Mayor Tonya Kendrix of Hermitage and Mayor Keeton Hudson of Banks rode together in the parade. Hudson served as second vice chairman of the festival and chairman of the Steak Cookoff. Pennington and Kendrix attended the All-Tomato Luncheon. Mayor Pennington introduced guests.

But the show went on and large crowds were on hand for all the activities, including the carnival and entertainers including Boots Bailey and the Boys, Jubilation Jazz, Mary Heather Hickman and David Lee Murphy.

After pageants in Hermitage on June 4, the Warren Lions Club Gospel Jamboree brought The Lisemby Family to Immanuel Baptist Church on Thursday. About 75 people attended a concert of approximately two hours.

The winner was Wardlaw; Gilmore, second; and Sanders, third.

In 12 and under, winners were Edie Gauge, first; Harley Caldwell, second; and Judson Green, third.

County Judge Klay McKinney kicked off the event by saying, “Don’t it feel good to get back to where we used to be?”

Gilmore introduced U.S. Rep. Bruce Westerman. “Tomatoes make me happy. The world needs more tomatoes,” Westerman said. He referred to drought conditions in California that have decimated canning tomato crops there, suggesting that Bradley County could look at planting canning tomatoes along with its other tomato crops.

Land said he remembered the first Tomato Eating Contest he had participated in. “We live in the greatest nation on Earth. Arkansas is the best place to live. Arkansas is full of good people,” he said.

Gavin recognized Bradley County Farm Families of the Year from 2022, Jason and Laura West; 2021, Jacob and Jamie Courtney; and 2020, Josh and Krystle Hays.

A quilt made by Bradley Block Builders was given away to Darwin Tiner. The giveaway benefitted Bradley County Medical Center Health Foundation, with Chairwoman Sue Martin.

The first box of tomatoes was auctioned off for a scholarship fund. Thomas Frazer submitted the winning bid of $2,600. Tony Cathey was the auctioneer.

Judy Simmons was honored for chairing the All-Tomato Luncheon for 30 years, although she is retiring after this year.

Next up was the Little Miss Pink Tomato Pageant held at Immanuel Baptist Church. JeNelle Lipton and Glenda Cross have chaired this event for more than 50 years. Payton Sledge was the mistress of ceremonies.

Results of the Cutest Baby Contest, Car Show and 5K Run/Walk were not immediately available. Chairpersons of those events are asked to send them to salineriverchronicle@gmail.com.

More photos and coverage from the 2022 Bradley County Pink Tomato Festival coming Monday evening, June 13. Follow us at www.facebook.com/salineriverchronicle for all the latest updates.