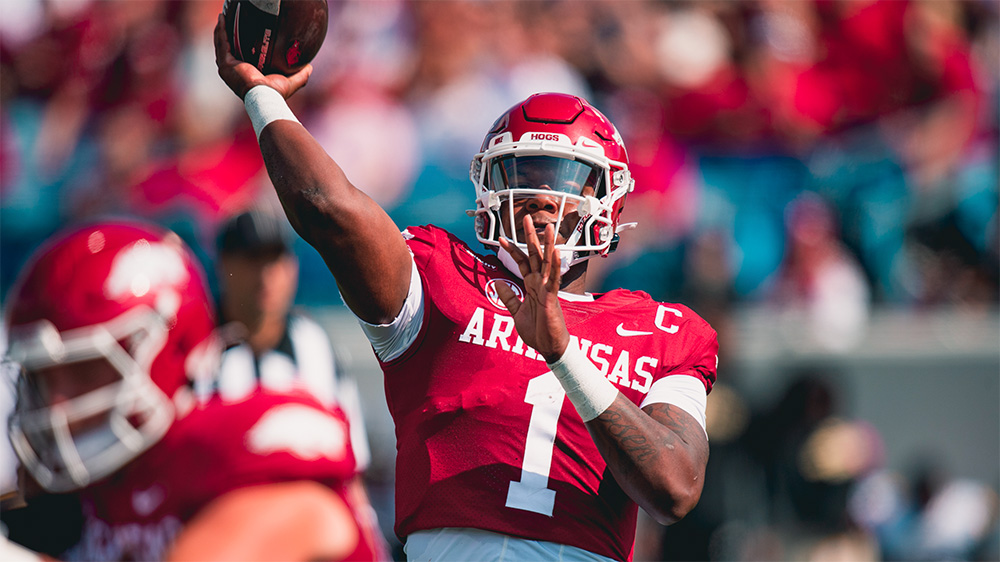 FAYETTEVILLE, Ark. – Arkansas’ KJ Jefferson has been named to the preseason watch list for the Davey O’Brien Award.

The Razorback quarterback is one of 35 players included on the watch list for the award presented annually to the nation’s best college quarterback. The award also honors candidates who exemplify Davey O’Brien’s enduring character while exhibiting teamwork, sportsmanship and leadership in both academics and athletics.

The face of the Razorback offense, Jefferson threw just four interceptions on the year and completed 171 consecutive passes without an interception, the second-longest streak in program history. He finished the season as one of only five FBS quarterbacks to total 20 or more touchdown passes with four or fewer interceptions.

Jefferson also rushed for a team-leading 664 yards on 146 carries with six scores on the ground. He was one of eight FBS quarterbacks with 2,500+ passing yards, 20+ passing touchdowns, 500+ rushing yards and 5+ rushing scores on the year.

In an epic performance at Ole Miss, Jefferson completed 25-of-35 (71.4%) passes for 336 yards and three touchdowns while rushing for 85 yards and three scores, accounting for six touchdowns – the second-most total in program history – in the high-scoring shootout. He became one of only six SEC signal-callers since 2000 to throw for 3+ touchdowns and rush for 3+ scores in a game, joining Texas A&M QB Johnny Manziel, Mississippi State QB Dak Prescott, Ole Miss QB Chad Kelly, LSU QB Joe Burrow and Ole Miss QB Matt Corral.

Arkansas opens the season at 2:30 p.m. Saturday, Sept. 3, against Cincinnati on ESPN. Season tickets are on sale now and can be purchased by clicking here or by calling the Razorback Ticket Center at (479) 575-5151.