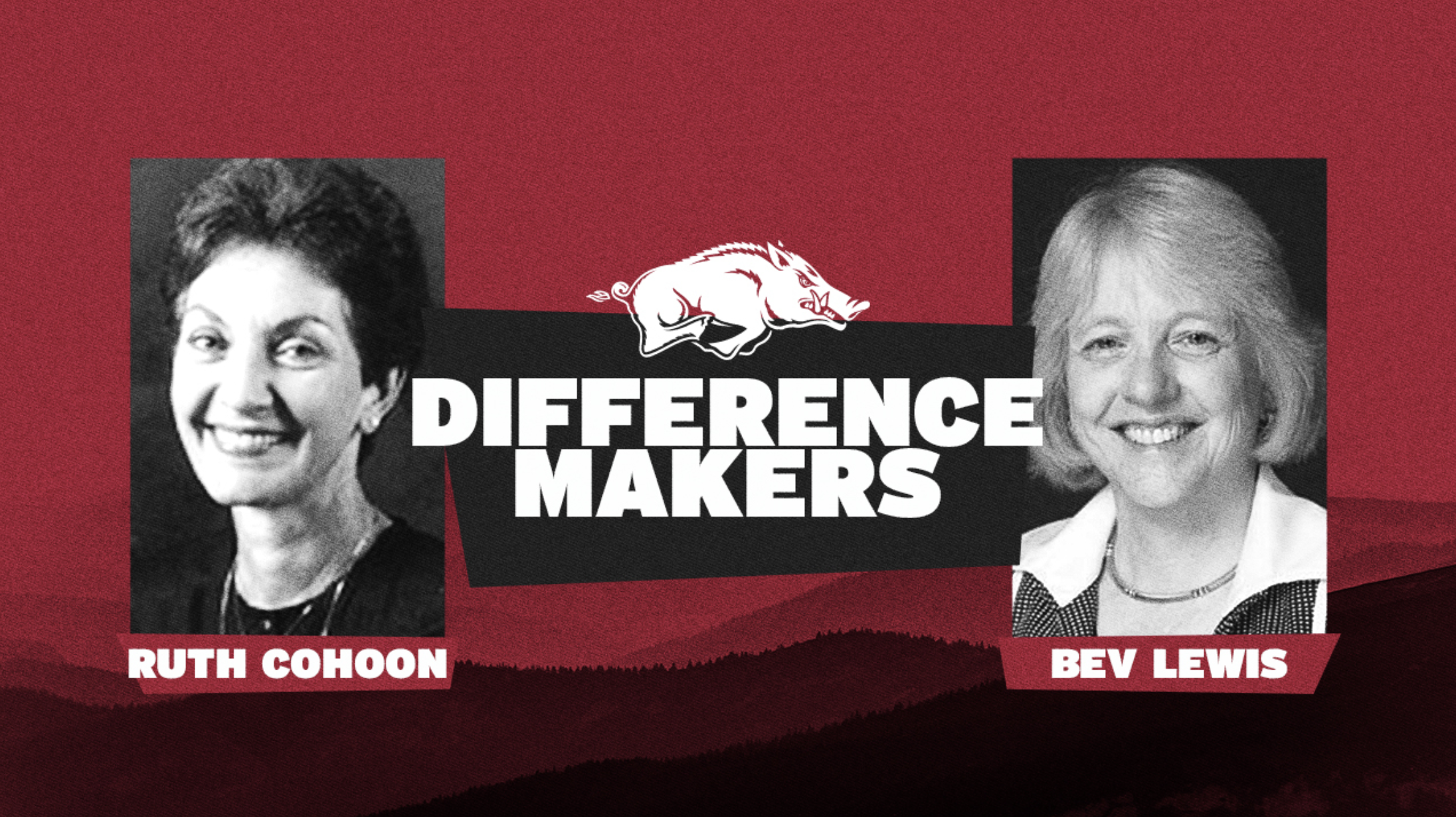 FAYETTEVILLE, Ark. –Ruth Cohoon and Bev Lewis were instrumental in laying the foundation for women’s athletics at the University of Arkansas. They will be honored this weekend as part of the university’s recognition of the 50th Anniversary of Title IX, the ground-breaking legislation that ensured equal opportunities for women.

Razorback Athletics will celebrate Cohoon and Lewis, who along with many other Razorback trailblazers, paved the way for thousands of student-athletes, with a special recognition weekend. Cohoon and Lewis will be honored on September 9, at the Arkansas volleyball match against Florida International and on Saturday, September 10 prior to Arkansas’ football game against South Carolina at Donald W. Reynolds Razorback Stadium.

Cohoon and Lewis will be introduced at the first set break of the Arkansas-FIU volleyball match in Barnhill Arena. First serve is scheduled for 7:30 p.m.

On Saturday, Sept. 10, at 9:30 a.m. University of Arkansas Vice Chancellor and Director of Athletics Hunter Yurachek will dedicate a plaque in Cohoon and Lewis’ honor on the Difference Makers Plaza, near Gate 10 on the northwest corner of Donald W. Reynolds Razorback Stadium. The event is free and open to the public.

• Open to the Public

In addition to the Difference Makers plaque dedication, Cohoon, Lewis will serve as honorary captains for the South Carolina-Arkansas game at 11 a.m. on Saturday.

Always eager to learn and grow, Cohoon expanded her role beyond teaching and swimming instruction and by 1971, she had volunteered to do some extra administrative work that included collecting the grades of female athletes and reporting them to the NCAA. She was in the right place when Title IX was signed into law and stepped into the role of the Director of the university’s first funded women’s athletic program in 1972.

Cohoon oversaw a $5,000 budget in 1972 and worked to improve that number to $500,000 by the late 70s. In 1979, she witnessed the combining of the men’s and women’s programs under the umbrella of Intercollegiate Athletics at Arkansas. The programs, however, would function separately, each with its own Athletics Director and support staff until becoming fully unified in 2008.

Realizing that funding would be a major factor in the progression of the women’s program, Cohoon orchestrated the formation of the Lady Razorback Club, a fund raising and scholarship program similar to the men’s Razorback Club.

Lewis was a pioneer for women’s athletics throughout her 33 years at the University of Arkansas, 19 of which (1989-2007) she spent as the Director of Women’s Athletics. The hallmark of that stint was the overall excellence of the entire women’s athletics program. During her tenure, the University of Arkansas moved to increase athletic participation for women with the addition of volleyball, golf, gymnastics and softball. All four sports competed in NCAA post-season competition by each inaugural recruiting class’s senior season, and they all established themselves as nationally competitive programs. Every Razorback women’s sport achieved a new athletic performance pinnacle under her leadership.

Lewis’ career at Arkansas began in 1981 when she joined the Lady Razorbacks as a cross country, track and field coach. Under her direction, cross country became the first women’s team to achieve a national ranking, earn the first top-10 finish at an NCAA Championship and win the university’s first Southwest Conference title. As her career evolved, Lewis did double-duty as a coach and administrator, taking over as Director of Women’s Athletics in 1989. She handed over her coaching responsibilities in 1990, dedicating herself to the advancement of Arkansas’ women’s athletics program through her administrative role. For nearly two decades, Lewis oversaw a separate Department of Women’s Athletics that served the unique needs of the female student-athlete. The addition of four sports, the construction of the largest women’s only strength and conditioning center, and the addition of nutrition and mental health programs are just a few of the many advancements Lewis engineered.

Lewis received one of her greatest personal honors as Bob and Marilyn Bogle requested that a newly constructed administration building dedicated to women’s athletics be named the Bev Lewis Center for Women’s Athletics in 2003. Lewis’ leadership was also key to the construction of Bogle Park and Razorback Field, the home to Razorback softball and Razorback soccer, respectively. Lewis served collegiate athletics at the highest level as an administrator, as a member of the NCAA Management Council, the NCAA Championship Cabinet and the Southeastern Conference Executive Committee. In 1998, she was voted into the University of Arkansas Hall of Honor for her contributions as a coach and administrator.