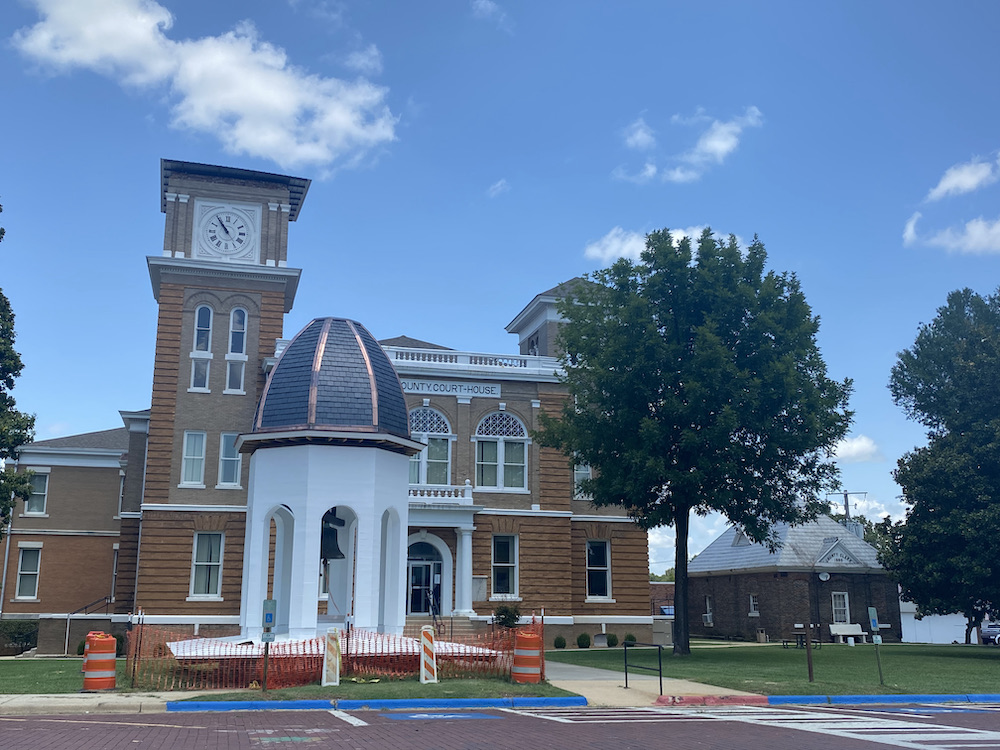 In response to a question from a Justice of the Peace regarding the status of securing additional money to help finish reconstruction of the Courthouse Bell Tower, Judge Klay Mckinney told the Quorum Court that the County remains some $56,000 short of having enough grant money to complete the needed work, and he has not heard a word lately about the prospects of getting the $56,000 covered by the State in some capacity. The County has received two grants from the State after running into unexpected construction issues. Judge McKinney reported the work was progressing and he hoped to have it completed in another six weeks. He said he was moving ahead regardless of the additional grant money because the work had to be completed as soon as possible.

The Court met for their monthly meeting Monday, September 19 with seven of the nine JP’s present. In public comments, Tim Emory told the Judge and Justices that there were no 55 mph signs on Highway 63 running north from Hermitage to Warren. He requested the County try to get this corrected. Judge McKinney stated the County would contact the State HIghway Department.

The Judge also talked about the thief of County road signs and the expense to the County.

Leslie Huitt, CEO of Bradley County Medical Center, updated the Court on the status of the local Hospital.

Judge McKinney informed the Court work on the 2023 budget would begin with meetings soon and plans for the use of the American Rescue Funds needed to be finalized.

The Judge informed the Justices that Bradley County was a recipient of a Safety Award during a recent Association meeting. The County was one of four not to experience an accident with injuries during the last year. This has helped keep insurance rates from growing as fast as the industry at large. Judge McKinney reported that Bradley 8N and work on the Farmerville Rd. has been completed.

In other reports, the Judge stated a recent audit by ADEQ came out good. The Judge then cautioned the Justices that he expects the next couple of years to be lean financially and the County must be careful with spending.

Finally, the Court adopted ordinance 2022-776 appropriating salary stipends for five law enforcement officers of the County, in the amount of $5,000 each.  The money was made available by the State of Arkansas. These are one time payments.