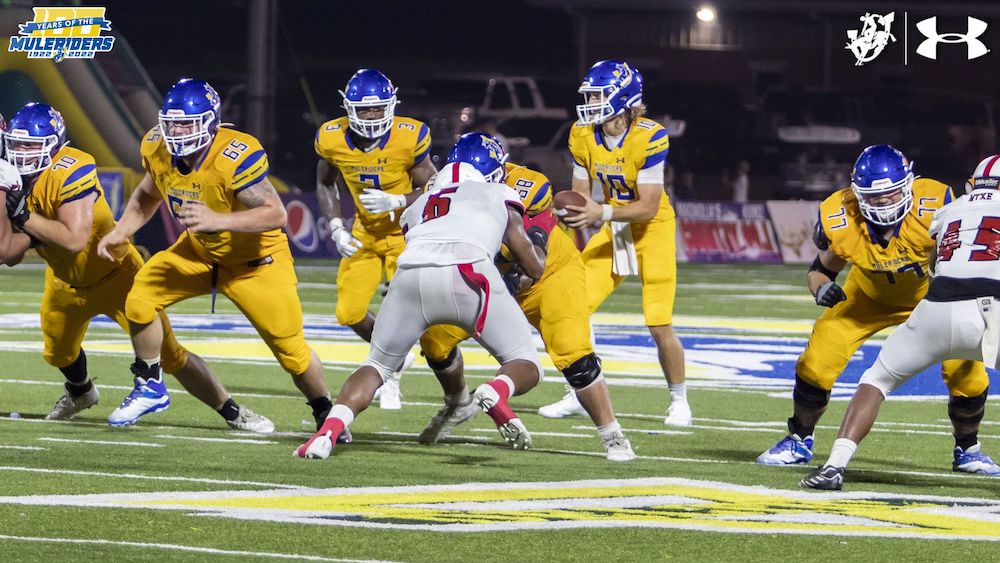 SEARCY, Ark. – Southern Arkansas trailed #7 Harding by just a touchdown at the break of Saturday night’s Great American Conference matchup from First Security Stadium, but the host used a ten-play, 75-yard scoring drive on its first possession of the third quarter and the lead would expand from there as the Bisons claimed the Week 3 contest 37-17 to remain unbeaten. The Muleriders fall to 1-2 on the season.

SAU went toe-to-toe with its nationally-ranked, in-state foe for the first two quarters of play. After going three-and-out on its opening drive and then seeing the Bisons eat over nine minutes of game clock on a 16-play, 78-yard drive that resulted in the game’s first touchdown, it took Southern Arkansas just 90 seconds to respond as junior quarterback OB Jones scampered 72 yards up the middle to tie the contest at 7.

Harding’s vaunted rushing attack tallied over 445 yards of offense and the Bisons used its second drive of the opening quarter to retake the lead at 14-7 early on in the second quarter of action. The Muleriders’ ensuing drive churned out 40 yards, but on the 11th play SAU was turned away on a 4th and goal play from the Harding two-yard line as Harding’s advantage remained in tack at 14-7 with ten minutes remaining before the intermission.

The Southern Arkansas defense responded by forcing a turnover on downs in the midst of a Harding drive that had already covered 63 yards in 6:39 of game time. The Muleriders were led on the defensive side of the football by junior linebacker Jacob Berry who delivered 11 tackles and a quarterback hurry, while true freshman Xavier Branch and redshirt sophomore Tre’Von Letts recorded nine stops each. The stop came on 4th and 5 from the SAU40 when Branch halted HU quarterback Cole Keylon for four yards with 3:21 left before the half.

SAU’s final first half drive resulted in grad placekicker Austin Wilkerson punching through a 36-yarder to pull the Muleriders to within four points of the Harding lead at 14-10. The successful make ties Wilkerson with SAU Sports Hall of Famer Jason Williams with the most made field goals in program history at 40.

Harding responded to increase its lead back to seven at the break as Grant Ennis connected from 43-yards out with no time left to cap a back and forth first half.

SAU managed just one third quarter drive which was halted on downs at the Harding 28. The Bisons scored twice on its pair of third quarter possessions as it held the football for 12:29. The Muleriders were forced to punt on its first drive of the fourth quarter and it led to a 91-yard scoring drive by Harding that staked the host to a 37-10 lead with under 4:30 to play.

The Muleriders used a 16-yard connection from redshirt freshman quarterback Judd Barton to redshirt junior Kamden Perry for its lone score of the second half.

Twenty-five of Harding’s 27 first downs came on the ground as 70 of the team’s 76 plays were rushes. Harding possessed the football for over 41 minutes and converted 11 of its dozen third-down opportunities.

Southern Arkansas ran 49 plays for 313 yards at 6.4 yards per play. It was balanced for SAU in the loss with 149 yards coming on the ground in 23 attempts, while the Muleriders completed 17 of its 26 passes across attempts from both Jones and Barton for 164 yards. The Muleriders took advantage of the time it did have the football (18:57) as it scored three times, saw two drives turned away inside the Harding 30, including one inside the HU3 and punted just twice.

Jones went 10-of-15 passing for 91 yards and added 83 yards on eight carries, including the 72 yard rushing touchdown which is the longest rush from scrimmage by a Mulerider since an 80-yard run by Michael Nunnery vs. Oklahoma Baptist on October 8, 2016. Barton added seven completions for 73 yards including the scoring toss to Perry in addition to adding 40 yards on the ground.

Southern Arkansas will return home for two of its final three home games in Magnolia which will take place in consecutive weekends. The Muleriders welcome in nationally-ranked Henderson State on Saturday, September 24 for Family Day. It will be the first meeting between the longtime foes in Magnolia since 2012. Kickoff is set for 6 p.m. Live coverage links will be available at www.MuleriderAthletics.com.