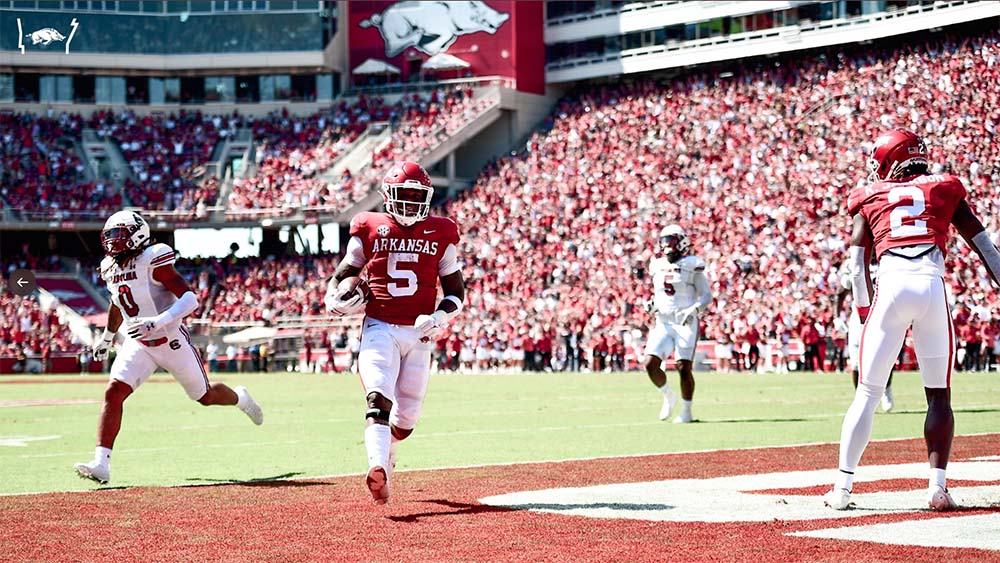 FAYETTEVILLE, Ark. – Moving to 2-0 on the season, the Arkansas Razorbacks took down SEC Conference opponent South Carolina Saturday, September 10, 2022 by the final of 44-30.

Arkansas struck first with 6:42 left in the first quarter as Raheim “Rocket” Sanders clamored into the end zone from a yard out. After the extra point, Arkansas led 7-0.

The Razorbacks scored on their first three possessions of the ballgame. Sanders picked up his second rushing touchdown of the game early in the second quarter, following by another rushing score midway into the period, this time courtesy of Rashod Dubinion. Arkansas last tallied touchdowns on their first three possession in 2019 vs. Colorado State.

Arkansas would go on to add touchdowns on the ground from quarterback KJ Jefferson and tailback AJ Green. Coupled with an aerial touchdown connection from Jefferson to Warren Thompson for 23 yards, as well as a late safety from South Carolina, Arkansas ended up putting 44 points on the board and picking up their first SEC conference win of 2022.

Jefferson rain the ball 19 times on the day for 67 yards. “Playing the QB position, you’re gonna get hit whether you got the ball or not,” he said during the postgame press conference. “You gotta have a dog mentality and then go in and get treated.”

Arkansas will next face Missouri State Saturday, September 17 at 6:00 p.m.