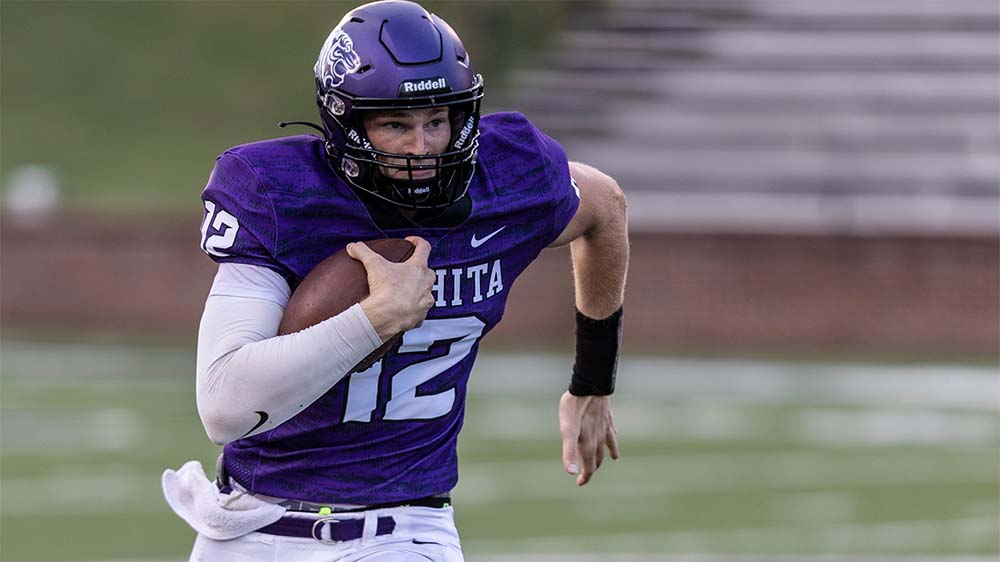 RUSSELLVILLE, Arkansas – The 10th-ranked Ouachita Baptist University football team moved to a 3-0 for the fourth consecutive season and 25th season overall on Saturday evening with a dominating 63-14 road victory over Arkansas Tech.

The 63 points was the most ever scored against Arkansas Tech in a series that began in 1924. Ouachita has now won five in a row over the Wonder Boys and nine of the last 11 meetings.

After Ouachita started with a touchdown just three plays into the game, Tech responded with a methodical drive to even up the score at 7-7. It was all Ouachita from that point, as the Tigers offense spread the ball around to six different players for touchdowns in the first half and the defense held strong leading to a 49-7 advantage at the halftime break.

With backups in the game in the second half, the Tigers were able to wind the clock, but they were not done scoring. Ouachita’s fourth string running back Isaac Edwards scored two rushing touchdowns in the third quarter to finalize Ouachita’s scoring. Tech found the endzone once more early in the fourth quarter with the game in hand.

Ouachita ended the game with 629 yards of total offense, the highest single-game team total since the Tigers had 632 yards in a 52-14 win over Oklahoma Baptist in 2017.

Individually, quarterback Riley Harms was perfect in his passing game, connecting on all eight of his pass attempts for a total of 247 yards and three touchdowns. He also had one rushing touchdown in the win.

Connor Flannigan led the receiving corps with four receptions for 95 yards and one touchdown. Xaylon Falls and Hunter Swoboda also had receiving touchdows in the win.

Ouachita’s defense came away with three takeaways in the game. Trey Proctor had his second interception of the season on Saturday, this time returning it 44 yards to set up a Ouachita touchdown right before half. Mario Ganter had the other interception, which was the first of his career. The Tigers also recovered a fumble on a botched punt return by Tech that also set up a short score.

Josiah Johnson and Jax Miller led the team in tackles with seven each.

The Tigers are now set for a top 10 battle with Harding next Saturday, September 24 at home. Both teams will enter the game at 3-0. Next Saturday’s kickoff is set for 6 p.m. at Cliff Harris Stadium.