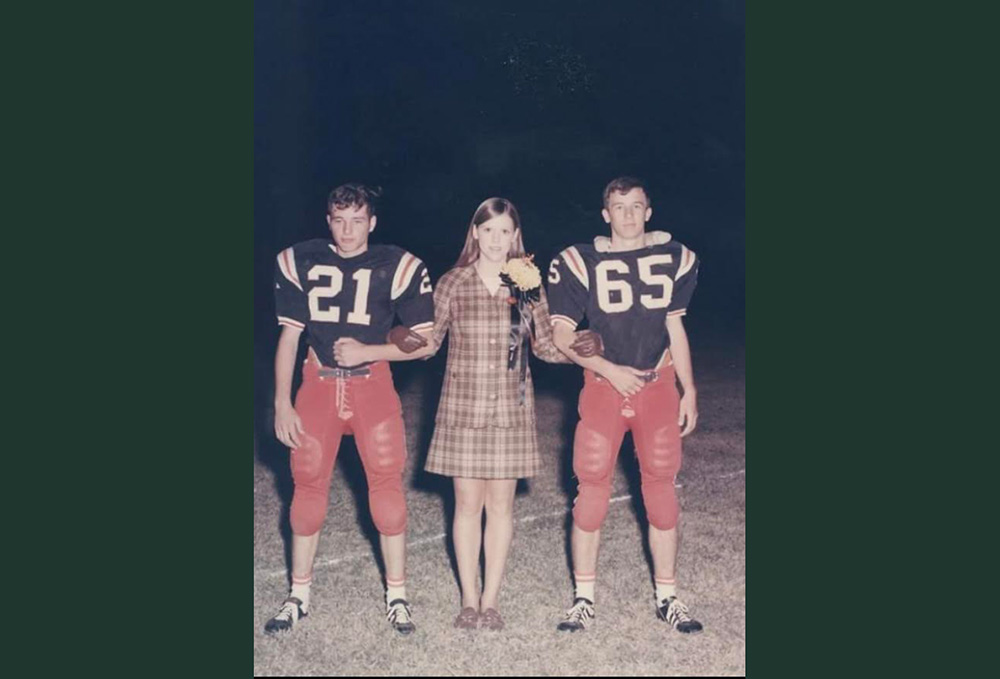 As football season progresses, the recent court of Homecoming at Warren High School was announced. And this Pastime leads us back to the Homecoming festivities of yesteryear.

Oh the weeks leading to football Homecoming was indeed a social, school and community activity that still lives on as a pastime to cherish.

First there was the written announcement with a photo appearing in the school newspaper, The Tall Timber Times of the members of the Homecoming Court.

This announcement of who was chosen by the football team, was one of the closest guarded secrets on campus and in the community.  Only Mrs. Elouise McFarland and her hand-picked homecoming committee, in connection with the head football coach, John McGregor, could pull off such a top secret balloting, counting and announcement. The publication of the news was always a fortnight ahead of the actual Homecoming Game date.

After The Tall Timber Times broke the story, an official announcement was made on the Public Address system used in the main school office, you know the office just inside the right hand door of the double-front doors of that long since down Depression era edifice once located on Pine Street.

Usually the high school principal’s secretary made the announcements of the day, but on the Homecoming Court announcement, Mrs. McFarland or her designee at WHC made the communication.

The Eagle Democrat followed up with a front-page photo in the next Wednesday’s edition and the two-week build up to Homecoming was on.

The WHS calendar back then didn’t have designated “days” for homecoming celebrations as we know today. There was no “TV star dress up day,” “Heritage Day,” or such day-by-day folderol celebrations. It was full on Homecoming Week.

It was all a build up to the Pep Rally Coronation in the WHS Gymnasium and the Homecoming Parade that same Friday afternoon just before the football game.

The was a select committee, again usually led by the Senior Class sponsors along with Mrs. McFarland, Mrs. Lucy Taylor, Mrs. Mary Culp, Mrs. Mary Jane Murphy, and others, usually the cheerleaders, build a toilet paper backdrop and arches for the homecoming royalty in the WHS gymnasium.

A part I got to play starting in my sophomore year was to gather up the white metal garden furniture for the Homecoming Court to sit on at both the coronation in the gym and at the football game. I guess I knew where all these homes were that had the furniture.

There were at least three or four homes where we were dispatched via pickup truck to fetch these heavy pieces from the backyards of Warren society.

We also fetched some “fake” green grass for the display from the Frazer Funeral Home. The Homecoming committee often was procuring this “carpeting” just a day from the actual ceremony. And we always, at the sponsor’s insistence, returned it post hate, being sure and having swept the “grass” off and returned it clean and dry.

Back to the FFA shop, these outdoor furniture pieces were carefully scraped by a steel brush, given a coat of primer, and then fortified with another coat of white paint. All this was under the watchful eyes of FFA shop teachers and Building Trades instructors at WHS.

Each class back then chose from the faculty, class sponsors, usually a man and a woman, and then spun into action.

Floats were to be constructed. Big, large, flat trailers were dragged to such construction spots as the National Guard Armory, the Hurley Hardware and Hankins & Son warehouses and others large buildings across town for design and to be built.

If memory serves me correctly, the building now occupying Molly’s Restaurant, was once a warehouse for one of the downtown businesses and served as a homecoming float construction spot for years.

The various members of the, say junior class, would often select or elect a float chairman. Design a theme, and oversee construction. All phases of work were done – after school each night for a fortnight. Often these marathons involved “stuffing” formed chicken wire with toilet paper or paper towels to fill the decorations.

In fact, we often used the tomato wrapping paper, which has a pink shade to it, as the wrap was in abundant supply (although it was not too good for taking on paint). The wrap was a means to fill out the skirt on the trailer or form up an Owl, Bulldog, Panther or other mascot (to be painted) for our beloved Lumberjacks to beat down on the float.

To this day, I can hear the horror and see the frenzied activity, when a float, my junior year, was pulled out of the National Guard Armory, heading to the parade route.

There was a big red-design of fire engine red paint on the polished concrete floor from our indoor painting job.

The late Lt. Col. Don Sebderry, David Sedberry’s dad, was the manager of the Armory. He was fiercely ordering two National Guardsmen and his subordinates to get some wire brushes, turpentine and scrape up that damn paint.

He was in all fairness trying to contain his composure as the pristine floor was accidently spray painted in a near perfect shape of the trailer frame.

As far as I know, WHS never used the Armory again to construct a homecoming float.

There was a very much less elaborate Homecoming Court float, usually erected to carry the white metal furniture and the court in the parade. Along with the float there was the gymnasium backdrop and the arches where the court members would walk under at the pep rally and on the field that evening.

A tradition back in the 1970s was the father escorted the court member at the pep rally, but in the evening it was the two football players as escorts for the royalty.

A Pastime to remember was the “coronation kiss” always front and center by one of the football escorts on the Queen as the football game was set to start.