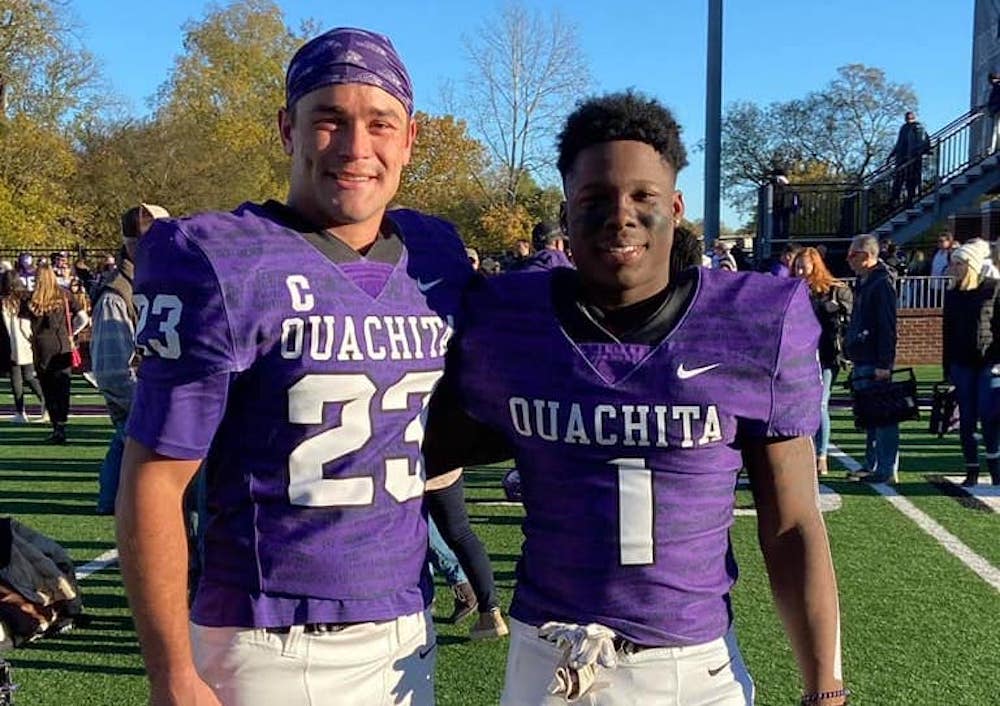 Arkadelphia, Arkansas – Sophomore Gabe Goodman gave his hometown crowd much to cheer about after his career-long 53-yard field goal helped the Ouachita Baptist University football team beat Henderson State 31-28 in front of a packed stadium at the 94th Battle of the Ravine on Saturday at Cliff Harris Stadium.

Goodman’s 53-yarder came with 57 seconds remaining in regulation. It was 10 yards longer than his previous career-high against Southwestern Oklahoma State in 2019.

The win is Ouachita’s fifth consecutive win over Henderson State, and gives the Tigers a 9-2 record to conclude the 2021 regular season. The Tigers now hold a 45-43-6 advantage in one of the most unique rivalries in small college sports. It is the seventh season of at least nine wins in Ouachita football history, the fifth since 2014.

Saturday’s battle started out with Ouachita going up 14-0 in the first quarter, highlighted by a 52-yard touchdown by quarterback Grant Allen.

The Reddies (9-2) answered with a pair of touchdowns to force a 14-all tie at halftime. Goodman had a chance to give the Tigers a lead going into the locker room, but his 45-yard attempt banged off the right upright about halfway up, proving he had the power for what ended up being a game-winner at the end of the second half.

The two squads went back-and-forth in the second half. Ouachita started the scoring with a three-yard touchdown run by Kendel Givens at the 9:06 mark to cap a six-minute drive.

HSU answered with a five-minute drive, capped by a 20-yard touchdown run from Duce Sproles, his second touchdown of the game.

Ouachita closed the third quarter scoring with a two-yard touchdown run by TJ Cole with 46 seconds remaining to put the Tigers up 28-21 going into the fourth quarter.

Neither team found the scoreboard until late in the fourth quarter. The Reddies marched 78 yards in five minutes, and tied the game on an 18-yard touchdown reception by L’Liott Curry from Adam Morse with 3:12 remaining.

Ouachita’s game winning-drive started with a 24-yard kickoff return by Xaylon Falls to set up the Tigers at their own 30-yard line. The Tigers picked up yards in big chunks with a 10-yard pass and a 23-yard run by Cole to get into HSU territory. Ouachita stalled at the HSU 37-yard line, forcing a decision to make on fourth down from the 36. With the encouragement of his on-field leaders, Ouachita Head Coach Todd Knight sent out Goodman for the long attempt, and the Arkadelphia native had plenty of distance to break the tie and end up giving his team the victory.

The Ouachita defense forced a three-and-out on HSU’s ensuing drive.