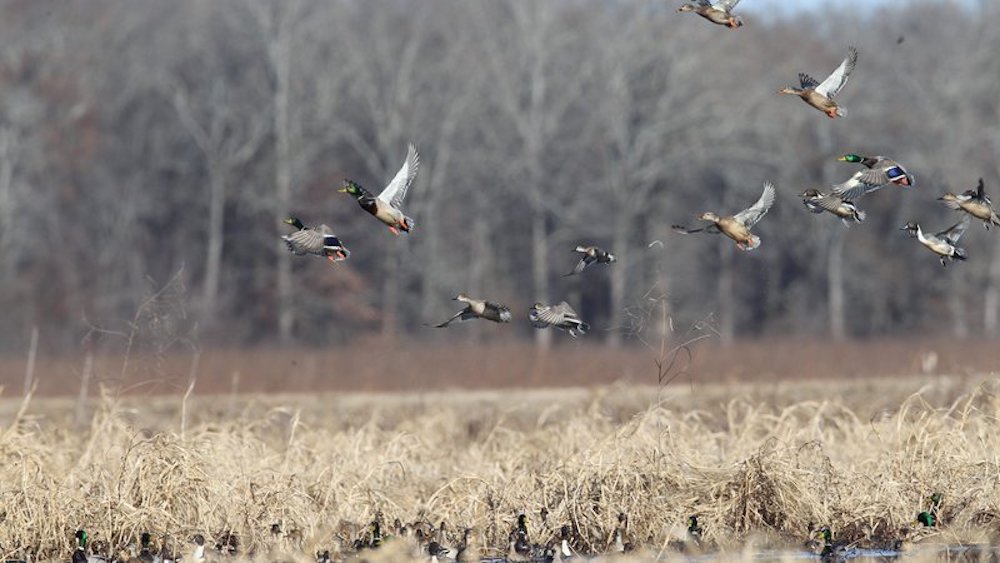 Little Rock, Arkansas – Arkansas duck hunters face the same conditions for the second weekend of the 2021-22 season as they did during the first: Little water can be found around the state.

Anecdotal reports from around the state the past week indicated that where hunters had water in fields and timber, ducks were there as well. But as Luke Naylor, Arkansas Game and Fish Commission waterfowl coordinator, said last week before opening weekend, without a good amount of rainfall in the state, the ducks that have arrived will adjust to the lack of habit and the hunting and seek safer refuge, and areas where duck success is high over the first few days of the season will likely see those harvest numbers quickly drop.

Some rain is forecast for the state Wednesday night and into Thanksgiving day, but not in the large enough amounts to inundate the landscape. AGFC waterfowl biologists have noted that in some wildlife management areas that are pumping water, such as Steve N. Wilson Raft Creek Bottoms WMA, the dry ground has absorbed some of the water and the efforts to fill all of those fields is a slow process.

Popular duck hunting destinations such as George H. Dunklin Bayou Meto WMA and neighboring Cut-Off Creek have mostly dry conditions. Southwest Arkansas WMAs are dry; Millwood Lake appears to be the destination for many ducks in the area.

Dave Donald Black River WMA is filling up, though, thanks to the river water. The three hunting areas in Big Lake WMA in northeast Arkansas slowly hydrating but still at least three-quarters dry. The Shirey Bay Rainey Brake WMA was no more than 35% covered as of Monday.

Harris Brake Lake has allowed the Harris Brake WMA to have about half to three-quarters coverage in its hunting area. As for the Arkansas River Valley and specifically Ed Gordon Point Remove WMA, the lack of rainfall has left the area considerably dry, but pumping of waterfowl impoundments began on Oct. 27 and will continue as long as water levels in Point Remove Creek allow. There are some areas of the WMA now will decent water for hunting, though nothing is close to 100% coverage. Further west Frog Bayou WMA has some areas with good coverage of water for duck habitat.

“I’ve been driving around a lot around the state and it’s a really, really dry landscape now. We haven’t had a substantial rain,” Naylor said last week. “Surface water is in short supply. We have seen private land owners and our (WMA) managers trying to provide water where we can. But we’re purposely not going to go to full pool in some areas that we can flood, but rather we will use staggered flooding that allows us to help the resource last for a long time.”

Hunting daily begins 30 minutes before sunrise, with the day’s shooting done at sunset. Daily bag limits are unchanged from last year: 6 ducks, which may include no more than 4 mallards (2 hens), 1 scaup, 3 wood ducks, 1 pintail, 2 redheads, 2 canvasbacks, 2 black ducks, 1 mottled duck. If not listed, up to 6 ducks of a species (such as teal) may be taken. The coot daily bag limit is 15 and the merganser daily limit is 5, which may include no more than 2 hooded mergansers. The first of the three splits of the 60-day duck season will conclude Monday, Nov. 29, at sunset. The second split will open Saturday, Dec. 11 and run until Dec. 23. The final section of the season runs Dec. 26-Jan. 31.

Plenty of online draw opportunities are available through the Arkansas Game and Fish Commission. Permit hunts are offered on Steve N. Wilson Raft Creek Bottoms WMA, the Red Cut Slough tract at Cypress Bayou WMA (though, without water, those permits are suspended until there is huntable water), the Conway George tract at Sheffield Nelson Dagmar WMA and Freddie Black Choctaw Island West Unit WMA. And AGFC has up to 45 privately owned flooded rice fields available to hunt by permit through its special duck hunting application process. Again, with the dry conditions around the state, some leased fields are still not available, though most owners are attempting to flood their fields this year and many have upgraded their blinds for a better hunting experience.

Applications for all draw hunts are open each week from 3 p.m. Thursday through midnight Sunday night the weekend immediately preceding the weekend for which you are applying. Applicants are notified whether they win or not each Monday morning, so they may plan for their hunt. Visit

https://www.agfc.com/en/hunting/migratory-birds/waterfowl/special-waterfowl-permit-hunts to learn more about these special duck-hunting opportunities and to apply.