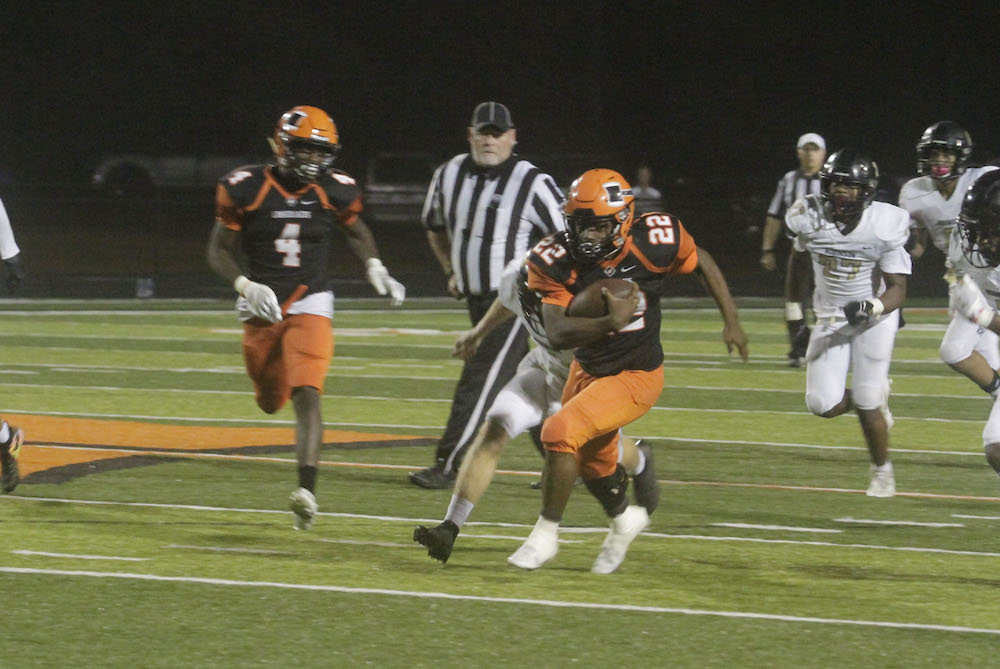 Warren, Arkansas – Hats off to Coach Hembree and his Warren Lumberjacks for completing another successful season. The 2021 season came to an end Friday night, December 3, 2021 as the Lumberjacks lost to a very talented Robinson Senators team by the final of 43-13 at Jim Hurley, Jr. Stadium in Warren.

Both teams came into the ballgame with only one loss. To the winner went the chance next Saturday of playing for an Arkansas Class 4A State Championship game in Little Rock. On this night, it just wasn’t meant to be for Warren. Robinson put in a top performance, controlling the game from start to finish.

It’s a loss that will sting to this group of Lumberjacks, but their accomplishments on the year as a whole are nothing to be ignored. Warren overcame a plethora of injuries along the way, yet still found a way to win 11 games on the trot, and secure another 8-4A Conference title.

As I left the stadium Friday night, several people mentioned to me they felt for me having to write about this one, and while I would have preferred a W to blabber on about, I’m feeling how I hope this group of young Lumberjacks will feel in the days to come, pretty upbeat. We just finished our second consecutive season taking our playoff run to the semifinals, we’ll be back, and this community still gets to rep the axes and the orange and black. That’s pretty darn awesome in itself.

Warren won the coin toss and elected to receive. The opening few minutes felt electric. The crowd was amped up. And props to the crowd. It looked like a bigger crowd than in past weeks, plus they were really behind the team. The Jacks’ first offensive play from scrimmage was a speed sweep to the right which Jacari Lee ripped off 12 yards and a first down. The drive stalled however, as three plays later Warren was forced to punt.

The Lumberjack defense, which has been brutal to play against all year I’m sure, came out looking to attack. Landon Wolfe made a quick tackle for just a one yard gain. The Senators went to the air on second down, and moved the sticks. Minutes later Warren was dealt a real blow. Aiden Weaver, who’s been a huge part of the Warren defense all year, and a player trying to tough out a knee injury, went down and clearly was not going to be able to continue. Robinson kept up their march down the field and scored early in the first to make it 7-0.

Warren fumbled the ensuing kickoff. Robinson recovered and scored again from a 20 yard touchdown pass with 6:10 to go in the first. They led 14-0.

Looking back, losing Weaver and then the fumble, seemed to take the energy out of the stadium.

On the next Jack possession, Warren went three and out, forced to punt to the Senator 49-yard line.

With 3:49 in the first quarter remaining, Robinson scored again. This time they took it into the end zone from a yard out. They faked the extra point and converted the two-point conversion to make it 22-0 in what felt like the blink of an eye.

The Jacks did find a bit of encouragement on the next drive. Maddox Lassiter came in at quarterback and ran for ten yards and a first down. Lassiter was able to get Warren down to the 24-yard line of Robinson by the end of the first quarter.

With 11:53 to go in the second, the Lumberjacks got on the board. The man, the beast, the ever-reliable Cedric Calbert broke off a 24 yard touchdown run. Jose Jacinto hit the extra point. The game looked to be back in a manageable position. Warren trailed 22-7.

Less than a minute later however, Robinson sank those good vibes through a 45 yard touchdown pass to take a 29-7 lead over the Jacks.

Warren’s next drive would be crucial. From their own 48-yard line on fourth down and three, Lassiter ran for four yards and a first down to keep the drive alive. With 4:55 to go before the midway break however, Warren was unable to convert the third fourth down conversion needed to stay on the field. The Jacks turned the ball over on downs in what felt like a last chance of sorts to keep the game within distance.

Defensively, the Jacks were still up for the fight. They forced a fourth down play from Robinson from the Jack 27-yard line with 2:22 to go in the quarter. The Senators not only got enough for the first, but they score to extend their lead to 36-7.

After the halftime break, Robinson put the final dagger in any hopes of a Lumberjack comeback when they scored once more from an 18 yard pass with 10:38 to go in the third quarter. The extra point was good to make the score 43-7 Robinson.

The Lumberjacks did get a consolation score in the fourth quarter when Maddox “Maddog” Lassiter ran it in from three yards. Warren’s two-point attempt was unsuccessful. That gave us the final score of 43-13 Robinson.

Robinson recorded 331 yards by way of a very balanced offensive performance. The Senators ran for 166 yards and passed for 165.

Cedric Calbert led the Jacks with 95 yards on the ground on 14 carries. He scored one touchdown.

Maddox Lassiter ran for 57 yards on eight carries. He had Warren’s only other score of the night.

Jacari Lee ran once for 12 yards.

Warren finishes the season 11-2 overall with an 8-4A Conference Title added to the trophy case.