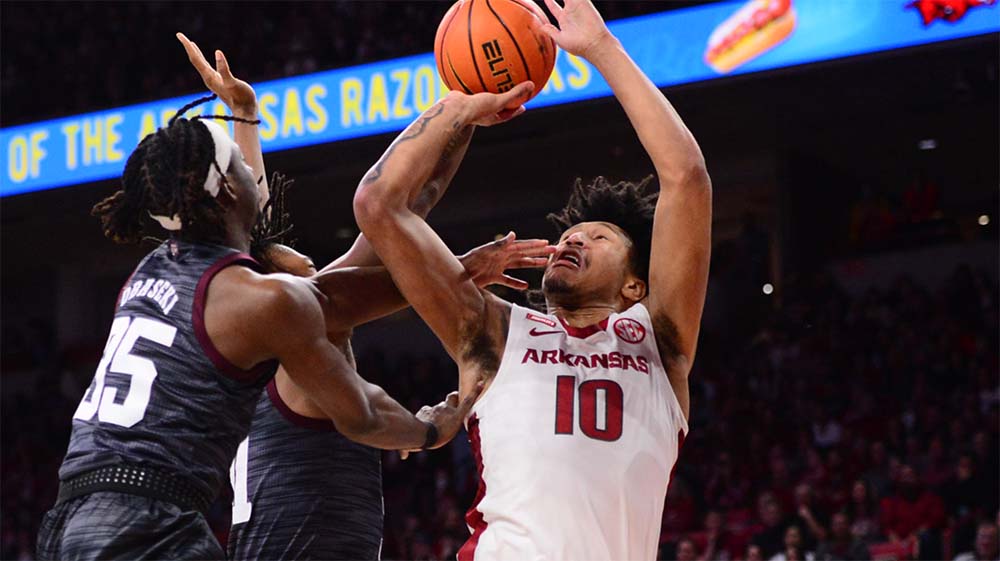 Fayetteville, Arkansas – Jaylin Williams hit a jumper with 13 seconds left in overtime – and the shot clock running out – for a 3-point lead then, after two Aggie free throws with five ticks left, Stanley Umude threw down a fastbreak dunk with 1.2 seconds remaining to give Arkansas a 76-73 victory over Texas A&M Saturday night at Bud Walton Arena.

Arkansas raced out to a 20-4 lead to start the game. The Aggies battled back and trimmed the deficit to four (33-29) at halftime.

Texas A&M would trim its deficit to one three times in the second half, but Arkansas continued to hold the lead. In fact, Arkansas pushed its lead to 10 (51-41) with 11:19 to go. The Aggies went on a 15-5 run to tie the game, 56-56. The Razorbacks would not surrender the lead and went on a 6-0 run to lead 62-56 with 1:09 remaining. The Hogs also led by six with 58 ticks left before the Aggies made three free throws at 0:52 and Hassan Diarra drilled a game-tying 3-pointer with nine seconds left to force overtime.

The Aggies took their first lead, 66-64, on a Quenton Jackson layup with 44 seconds into the overtime period. Later Hasson made a layup to put the Aggies up 68-66. From that point, Arkansas got an old-fashion 3-point play from Davonte Davis with 2:31 left to put the Hogs up one, a lead it would not relinquish.

Up one after an A&M 3-pointer, Arkansas went up three on Williams’ jumper with 13 seconds left. Wade Taylor got the Aggies back to within one after making two free throws with five seconds left. Davis took the inbounds pass, out-ran the Aggie defensive and found an open Umude, who threw down his dunk to seal the 3-point win.

Arkansas returns to the road to face Ole Miss on Wednesday (Jan. 26). Tipoff is set for 6 pm (CT) and the game will be on SEC Network. After Ole Miss, Arkansas will play three of its next four at home, including a Jan. 29 (Saturday) meeting with West Virginia as part of the SEC-Big 12 Challenge.