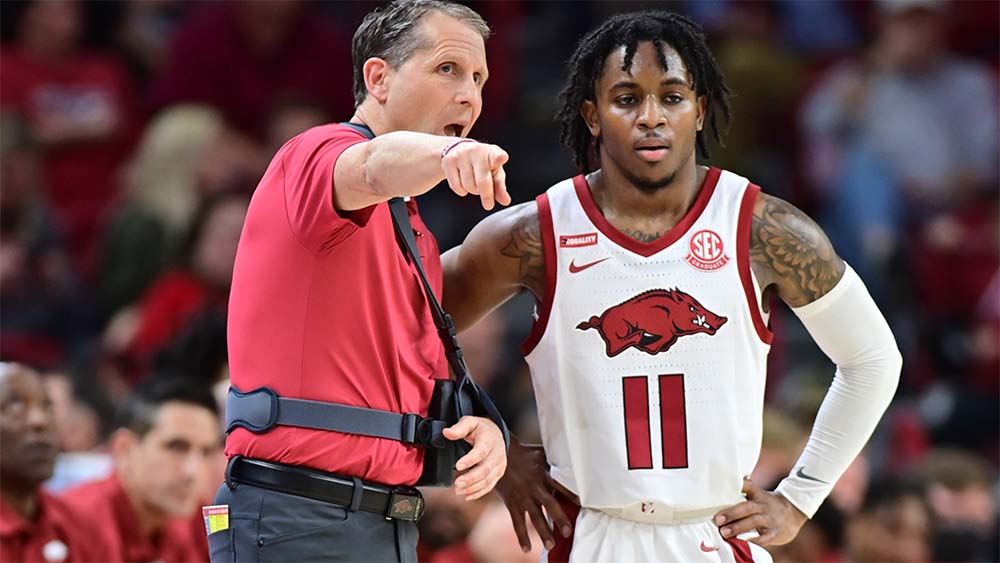 Fayetteville, Arkansas – Arkansas opened the second half with an 18-1 run to grab a 10-point lead and pulled away for a 16-point, 75-59 victory over South Carolina Tuesday night at Bud Walton Arena.

Jaylin Williams had a career-high 19 points, sinking career-high 9-of-10 from the free throw line, with nine rebounds, just missing his fourth straight double-double JD Notae was 7-of-8 at the line and scored 17 with seven rebounds, five assists, three blocked shots – tying his career-high – and one steal. Au’Diese Toney added 13 points and eight rebounds while Stanley Umude had 12 points and six boards.

Arkansas wins its third straight but had a 33-year-old streak end as the Razorbacks went 0-of-11 from 3-point range. Arkansas had made a 3-pointer in 1,092 consecutive games – dating back to Jan. 7, 1989 – which ranked as the third-longest such streak in the NCAA.

The Razorbacks were able to win, in part, despite not making a 3-pointer by going 27-of-33 at the free throw line – the second-most makes and attempts this season.

Arkansas, which only got a combined 17 minutes from Williams and Notae due to foul trouble, was down four with 31 seconds left in the first half. However, after a missed 3-pointer with 15 ticks left, South Carolina’s Devin Carter drained a triple with three seconds left to provide the 40-33 halftime lead for the Gamecocks.

The Razorbacks had the ball to start the second half and scored the first three points of the period. South Carolina made 1-of-2 at the line at the 17:32 mark and would not score again for over three minutes as the Hogs completed their 18-1 run.

Arkansas stays home to host Texas A&M on Saturday (Jan 22). Game time is set for 7:30 pm on the SEC Network.