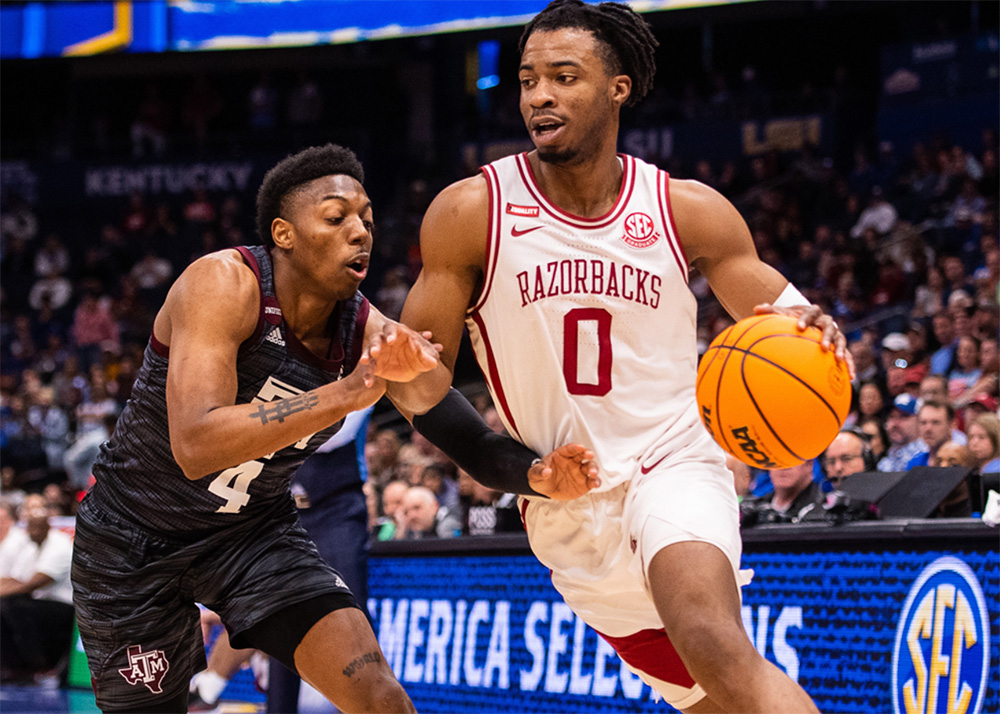 FAYETTEVILLE, Ark. – Razorback Stanley Umude will be in New Orleans during the Final Four weekend to play in the Reese’s College All-Star Game, the National Association of Basketball Coaches (NABC) announced today.

The All-Star Game will be played Friday (April 1) at 3:30 pm (CT) at Caesars Superdome in New Orleans. The game is part of Reese’s Men’s Final Four Friday, which is open to the public and free to attend.

The All-Star Game will additionally be broadcast live on CBS Sports Network.

Umude averaged 11.9 points and 4.6 rebounds in helping the Razorbacks reach the NCAA Elite 8. Thanks to ranking ninth in the NCAA in scoring last season (21.6 ppg at South Dakota State), Umude ends his collegiate career with 1,960 points and is 1 of 18 active NCAA Division I players to have at least 1,500 points and 600 rebounds, ending with 720 boards.

Amazingly, as the season progressed and the games meant more, Umude’s stats continued to improve.

In his first NCAA Tournament game (Arkansas vs. Vermont), Umude had maybe his best career game. He led the team with 21 points, making 3-of-4 from 3-point range, tied his season-high with nine rebounds and became the first Razorback to play 40 minutes in an NCAA tournament game and have zero turnovers. Umude was additionally 6-of-6 at the line with the six makes being a season high and six attempts tying a season high. Among the six at the line, two came with 9:34 left to give Arkansas a lead it would not relinquish. For good measure, he added two blocked shots.

Umude scored in double figures 20 times, including 16 times after SEC play began. He posted a season-high 31 points in the win at Georgia, making a career-high six 3-pointers, and matched that career-high with six triples to score 23 points at Missouri.

Umude made the Department’s Honor Roll (3.0-3.49 GPA) for Fall 2021 and is a member of the Southeastern Conference Men’s and Women’s Basketball Leadership Council.

Prior to Arkansas, he played four seasons at South Dakota, earning 1st team All-Summit League twice (2021 & 2019) and 2nd team all-league once (2020). Umude graduated from South Dakota in the spring of 2021 with a Bachelor of General Studies degree and was pursuing a second undergraduate degree at Arkansas in arts & sciences. Umude scored 1,520 points at USD to rank 11th on the Coyotes’ all-time list.