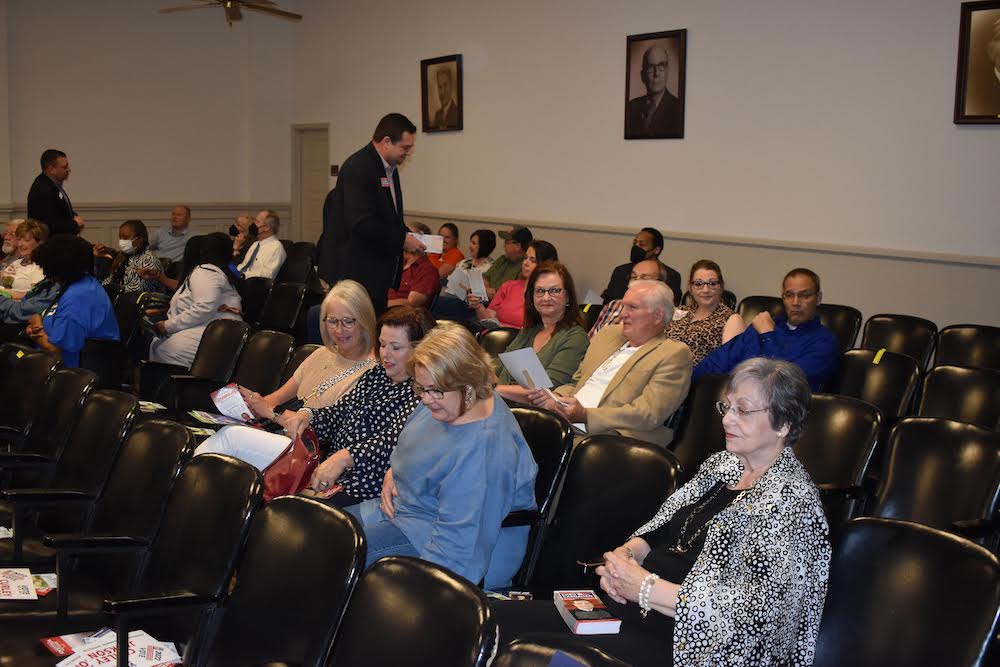 WARREN, Ark. – A large crowd came to hear from local and statewide candidates for upcoming elections at the Bradley County Courthouse Monday night.

The event was sponsored by Bradley County Republican Party but it was also attended by one Democratic candidate and several nonpartisan judicial candidates.

County Judge Klay McKinney gave the welcome and said, “We need to hear from the candidates that are going to represent us.” He led the audience in prayer and the Pledge of Allegiance. David Harper served as master of ceremonies and gave each candidate 3 minutes to speak.

Jimmy Williams led the candidates, as he is running for District 5 Justice of the Peace. He recounted that he had served in the military and as a teacher but is now retired.

Sharon Balentine, running for District 9 JP, said she was civic-minded. “I promise to be of unquestioned integrity,” she said, adding she had observed several Quorum Court meetings.

Dana Harvey, also running for District 9 JP, said she grew up in Bradley County. “I want the county to be here and be viable,” she said, citing needs for roads and waste management.

Eddie Wayne Parnell Jr., also running for District 9 JP, cited his 26 years of military experience. “If we brought a few more assets to the table, we’d be able to collect the benefits,” he said.

Demetria Edwards of Lake Village, running for District 10 circuit judge, Division 4, said she has been an attorney for more than 20 years. “I want to administer justice in the way of the wisdom of Solomon,” she said.

Quincey Ross, running for reelection to the same position, said he succeeded his aunt, P. Luevonda Ross, who passed away in 2016. He said he had presided over 2,200 cases which have been closed. “The key thing people are looking for is fairness,” he said.

Faulkner and Van Buren Counties District Court Judge Chris Carnahan of Conway said he is running for Arkansas Supreme Court, Position 2. He is a former general counsel for Arkansas State Board of Pharmacy. He is endorsed by Gun Owners of Arkansas.

David Sterling, also running for Arkansas Supreme Court, Position 2, noted they are running against incumbent Robin Wynne. “I believe in the separation of powers,” he said. Sterling grew up in Texarkana and has been practicing law for 25 years.

Curley Jackson, running for District 94 state representative, is currently the mayor of Wilmar. He emphasized that he would concentrate on essential services, such as sewer, road and water utilities. He said small cities in the state don’t always know how to access grant funds. “We need better organization in our state,” he said.

Andrew Pritt, also running for the District 94 seat, said he is running as a Democrat. “Bradley County produces leaders and I want to follow in their footsteps. We need to work together. I’m running on a platform about jobs, not a jail,” he said.

State Rep. Mark Lowery said he is leaving his position after five terms to run for state treasurers. He said he was the lead sponsor in the General Assembly for the voter ID law and also sponsored a change in the law about the way the state funds higher education.

Paul Timmer, representing Eddie Joe Williams, who is running for secretary of state, said that Williams served as Cabot mayor and had brought that city from a deficit budget to a surplus. He said Williams also served 35 years as a regional transportation director.

Secretary of State John Thurston appeared at the forum and said before he entered politics, he had served in the ministry for 13 years. In 2010, he was elected as the first Republican commissioner of state lands since Reconstruction. Of his duties as secretary of state, he said, “We had the most secure elections in state history” even with restrictions due to COVID-19.

Representing state attorney general candidate Leon Jones, Len Blaylock III said Jone grew up in Pine Bluff and was a University of Arkansas at Pine Bluff candidate. He has spent 20 years in public service. Blaylock said Jones would concentrate on enforcing laws about human and drug trafficking and cybercrimes.

Another attorney general candidate, Tim Griffin, sent a letter noting that he was a former U.S. Congressman and now serves as lieutenant governor. He said he would work to reform the criminal justice system especially in dealing with violent offenders.

Unopposed candidates who were present but did not speak included McKinney, and JPs Jimmy Sledge and Eddie Wayne Parnell Sr.