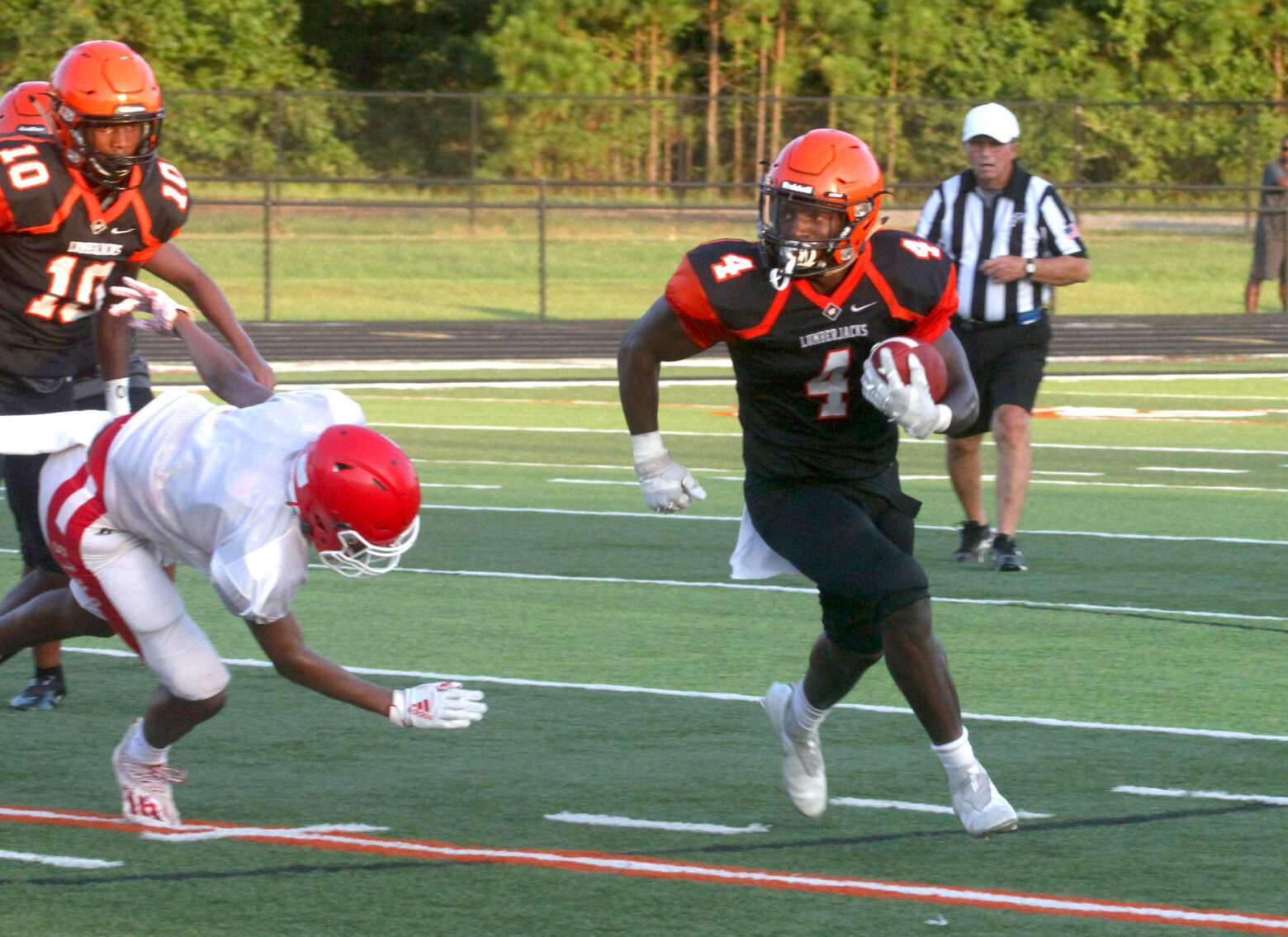 Fans were given an early glimpse of the 2021 Warren Lumberjack Football Team Tuesday evening, August 24 as the orange and black hosted the McGehee Owls in what has become a traditional pre-season scrimmage between the old South Arkansas conference opponents.

These games are meant to give the respective coaching staffs a chance to iron out wrinkles ahead of season play, as well as to get the kids in game-shape. It’s a workout for both teams at the end of the day.

The first half was set up to give each first-team offense 15 plays each, followed by a second half with a true game-clock. There were no live special teams plays. Although, kickers did try extra points and punt with no pressure applied.

A few plays later Warren’s Cedric Calbert burst through a big gap opened up by the Jack offensive line and cruised into the end zone for a Lumberjack touchdown. Senior kicker Jose Jacinto knocked through the extra point as the Jacks led 7-0.

Warren’s first team offense kept the ball for the remainder of their 15 plays. Payne would break free, leaving behind his defender in the dust, but again the pass was just a bit beyond his grasp. Warren fans won’t be upset with that however. QB Riley Cornish’s arm was strong, and if you are going to miss on a deep ball, you want to miss with an overthrow. That type of pass is not going to be intercepted. Cornish looked solid throughout the game. He should be a big boost to this Warren offense.

McGehee’s offense took to the field just moments later for their 15 plays. Warren’s defense snuffed out an early run, forcing a fumble which was recovered by Jack defender Jalen Lee. That’s a name you’ll hear a lot more this season.

McGehee did break a run wide right a play or two later for a long touchdown run. They went for two and converted, making the score 8-7 McGehee.

The Owl offense stayed on the field to finish out their remaining 15 first-team plays. Jacari Lee, the young man that really made a name for himself among the Warren faithful last season, undercut a McGehee pass to break it up. He looked menacing. Not many QBs are going to want to test things through the air Lee’s direction this season.

Later in the McGehee first team possession period, Warren junior Aiden Weaver recovered a fumble and Treylon Jackson did some shut-down defending in the Warren secondary.

A play later, Warren should have scored a defensive touchdown, as a McGehee backwards pass was picked up and set to be returned for an 80 yard touchdown. However the line official blew the play dead. McGehee’s second team offense wouldn’t get much more that drive.

Warren’s second team offense came onto the field for a few reps. A big question mark for Warren this season is who will help ease the burden on Cedric Calbert at RB. Sophomore Matthew Powell set up there for Warren and put on an impressive display. His first touch was a nearly 25 yard gain and a first down.

A long Warren drive was capped off with a QB power up the middle by Maddox “Mad Dog” Lassiter. He pushed through for a 5 yard touchdown run. Jacinto’s extra point was good and the Jacks went into the halftime break down just 16-14.

During the second half two real-game clock quarters were played. Calbert continued his excellent outing with a 51 yard run.

Jacari Lee then caught a pass from Cornish in the flat, and zig-zagged his way past a few McGehee defenders for a 23 yard rushing touchdown. Jacinto hammered home the extra point to restore the Warren lead at 21-16. The Jacks wouldn’t look back.

McGehee did answer that with another touchdown of their own to cut the score to 28-22.

Cornish would hit Payne over the middle on Warren’s next drive for a 70 yard touchdown. The throw had to be on the money, and it was.

Lumberjack Sophomore DB Treylon Jackson picked off an Owl pass on the next McGehee drive, returning it untouched for a 35 yard touchdown. He was a new standout on the night. Jackson looks fast, reads the game well, and is one to watch for big-time growth the rest of this season.

Calbert continued to do what Cedric Calbert does oh-so-well, pounding home another touchdown, this one from 5 yards out for Warren.

McGehee would grab another touchdown late, but the Jacks came out on top by the score of 56-30.

The Lumberjacks travel to White Hall Friday, September 3 in Warren’s opening regular season game of the 2021 campaign. The game kicks-off at 7:00 p.m. CST.

Saline River Chronicle’s facebook page will be posting live updates throughout the night, so be sure to give us a follow. Then, Saturday, September 4, drop by our site for the Warren Bank and Trust weekend sports edition, including our full-game report, the Doctor Joe Wharton Arkansas High School Football Scoreboard, as well as the announcement of our AHF Products Player of the Game.