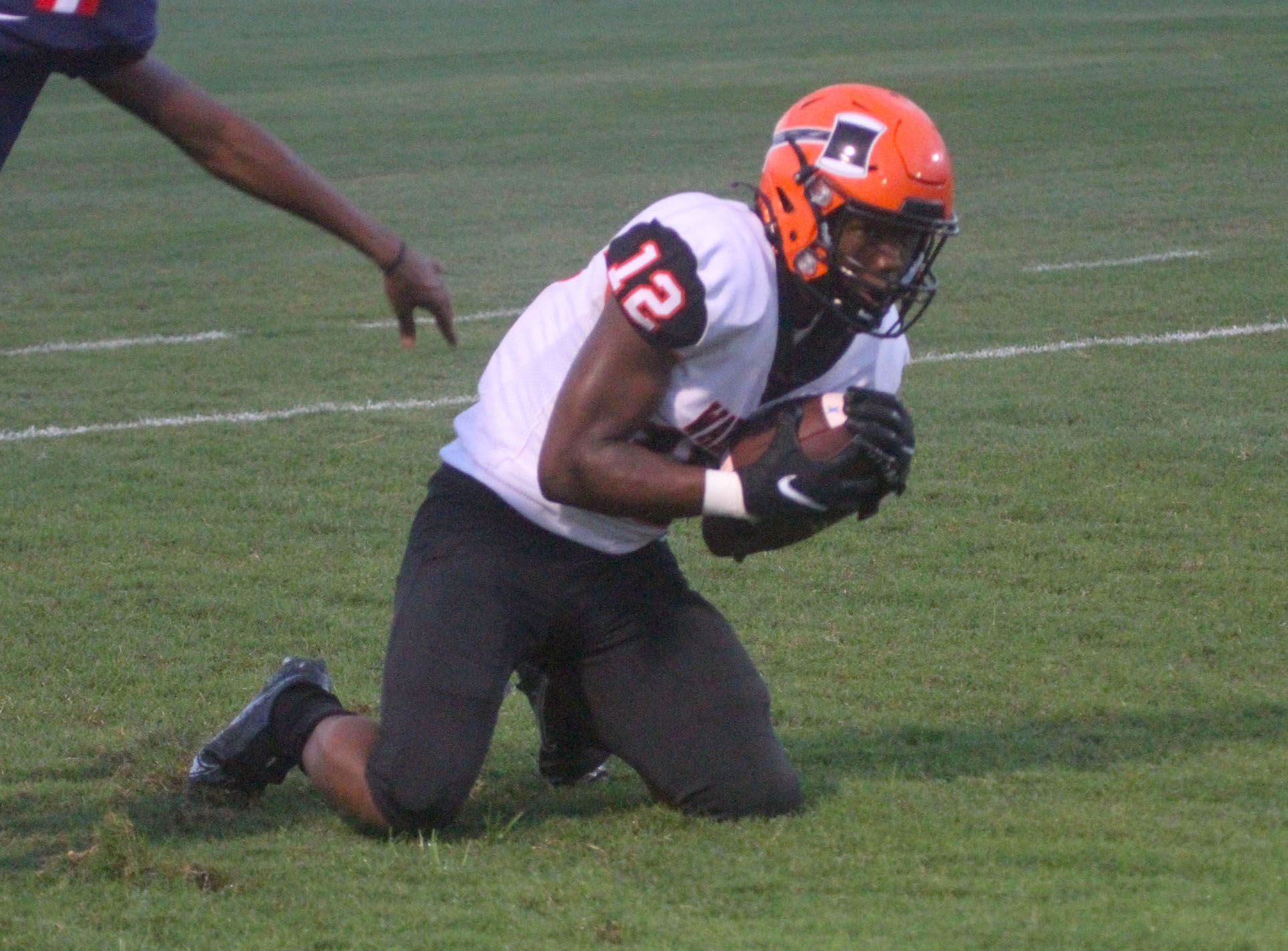 As far as we can find in our research, for the first time in 116 years since its founding, the Warren Lumberjack Football team took on an out-of-state opponent in a regular season football game Friday evening, September 17, 2021 playing the Franklin Parish Patriots on the road in Winnsboro, Louisiana. The Lumberjacks put on a show for northeastern Louisiana, putting up 42 points in Warren’s week three win and last non-conference game of the 2021 season.

Scattered showers and thunderstorms peppered the Winnsboro area in the build-up to the game, dissipating just about 45 minutes prior to kickoff.

Warren kicked off to open the ballgame, going back to the onside kick that was so prevalent in week two. Franklin Parish successfully fielded it however with their first possession starting at midfield.

The Jack defense came out hungry, with the defensive line breaking through on the first play from scrimmage ending in a tackle for a loss of yards. Pinned back by Warren’s aggressive play, Franklin Parish tried to go off tackle on third and three, but Jalen Lee burst through the right side of the Patriot line, making a huge tackle to force a punt early in the opening quarter.

It didn’t take long for Warren to make their intentions known on the offensive side of the ball. Cedric Calbert took a hand off for a big first down run. He looked like a man on a mission, running with power. A couple of runs from Calbert later, the Lumberjacks set up at the Franklin Parish 14 yard line. Senior quarterback Riley Cornish dropped back to pass and nestled a beautifully weighted throw into the hands of Tayshawn Johnson for a touchdown. The extra point was no good. Warren led 6-0.

Again, the Lumberjack defense came out with a vengeance. Franklin Parish’s ensuing drive ended in a quick three and out after a run and an incomplete pass amounted to nothing.

A tough break for the Lumberjack faithful happened near the 3:20 mark in the first quarter, as Calbert went down injured. This was his first game back from a small knee issue from week one. He wouldn’t get back on the field for the remainder of the game, but was up walking and icing his leg.

With under three minutes left in the quarter, Treylon Jackson slotted in at tailback. Mainly a play-maker on the defensive side of the ball for Warren, Jackson came in and did a terrific job, running hard and finding gaps. His first run took Warren down to the Franklin Parish 20 yard line. He would get the Jacks down to the five yard line, when Coach Bo Hembree brought in the “Maddog” package, featuring Maddox “Maddog” Lassiter at quarterback and Landon Wolfe at running back. With 1:05 left in the quarter, Wolfe blasted his way through to the end zone for a three yard touchdown. The Jacks went for two and converted it, extending the lead to 14-0.

Franklin Parish’s next possession nearly ended in disaster for the Louisiana bunch, as a pass out wide was almost hauled in by Warren’s man-of-war on defense, Jalen Lee. He took a big vertical leap, but just didn’t quite have the range, and the pass fell incomplete.

Franklin Parish was forced to punt a play later to start off the second quarter.

Warren wasted little time. With 11:29 remaining in the half, Riley Cornish play-actioned and looked deep. He would find Jarard Payne on a go route. Payne blew past the corner and safety, catching the 48 yard touchdown pass to extend the lead to 20-0. The extra point was no good.

The Patriots received a lucky break on their next offensive take. Treylon Jackson took advantage of an errant pass, picking it off deep in Warren territory and starting to return it for what looked to be a big gain and a big field flip. However, a flag was thrown and the play was blown dead. The call seemed to be simply an inadvertent whistle. Either way, it gave Franklin Parish a slight lifeline.

Things seemed to go their way over the next minutes. Warren muffed the punt a play later, but recovered. The starting field position was not ideal, beginning the drive on our own 6 yard line.

On Warren’s next play, a run went south in a hurry, and the Jacks were forced to take a safety. They led 20-2 partway through the second.

After the safety, Maddox “Maddog” Lassiter, who has duel roles, as both a linebacker and a punter, pinned Franklin Parish deep in their owned territory after the forced kick after the safety.

The Patriots appeared to have a little momentum swinging their way, but the pendulum swing didn’t hang their way long. Warren’s Tayshawn Johnson ruined the party, breaking hard on a pass to the far side of the field on what was an out route. He picked the pass off and was gone to the races, running it back 48 yards for another Lumberjack touchdown. Again, Warren went for two and successfully converted. They led 28-2.

Treylon Jakson would put on a similarly stunning display on the next Lumberjack drive. He carried the ball five times picking up good yardage each time, with one rush for 22 yards. Coach Hembree called Jackson’s number to finish off the chance from inside the five. Jackson bounced out wide and in for a 3 yard rushing touchdown.

Warren went into the halftime break up 35-2.

The third and fourth quarters were a bit more subdued, as the game was clearly in hand from the start of the second half. Warren sophomore Matthew Powell did come in and take some good reps at tailback, running for at least one gain over 10 yards.

Receiver and makeshift tailback Jacari Lee would spread the icing on the cake late in the third period. He took a handoff and turned on the jets, running 81 yards to the house for another Lumberjack touchdown to make the score 42-2.

The clock ran continuously in the fourth quarter, but Franklin Parish did pull one touchdown back, scoring with under 6 minutes remaining to give us the final score of Warren 42, Franklin Parish 10.

With under a minute to go in the fourth, there was some impressive play from defensive end Neeyo Harding. He was credited with a sack as well as a rushed pass.

Treylon Jackson led the Lumberjacks in rushing, carrying the ball 10 times for 122 yards. Cedric Calbert, even with his limited night, picked up 64 yards on five carries. Jacari Lee had four rushes for 75 yards.

Riley Cornish threw for 103 yards on the night.

Tayshawn Johnson had 28 yards through the air on two receptions, and a touchdown. Jarard Payne had one reception for 48 yards.

The Lumberjacks move to 2-1 on the season, and now get set for their opening 8-4A conference matchup, as they host the Crossett Eagles next Friday night, September 24, 2021. Kickoff is at 7:00 p.m. at Jim Hurley, Jr. Stadium in Warren.

Top Photo: Warren’s Tayshawn Johnson goes down to his knees to catch the Lumberjack’s opening touchdown of the night. Photo by Robert Camp.

For more photos from Robert Camp from the Warren vs. Franklin Parish game, click here.