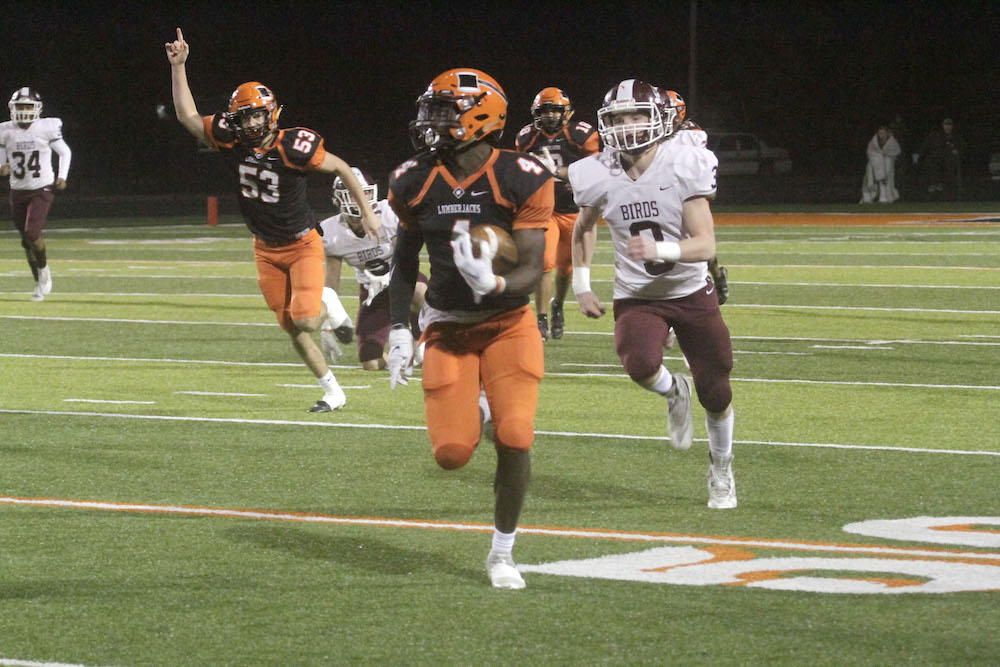 Warren, Arkansas – The expectation of playing the day after Thanksgiving, on a cold night at Jim Hurley, Jr. Stadium, in the 4A State Playoffs is simply what this program, and more specifically, the culture Coach Bo Hembree brought to Warren a couple of decades ago is all about. It’s much easier said than done, and a quick check of the Dr. Joe Wharton Arkansas High School Football Scoreboard from last night will show you that very few teams get the honor of playing football this time of year. For the Warren program, it has become a fairly regular occurrence, a fact which I sincerely hope our fanbase doesn’t take for granted. So few communities have that type of year-in-year-out success. It’s rare, and something to be relished and cherished.

Lumberjacks can enjoy another weekend after a huge win, as the Jacks took down the Stuttgart Ricebirds Friday night in the quarterfinals of the 4A State Playoffs by the final of 36-29 after a hard fought battle filled with thrills, spills, and lots of offense.

Coach Hembree told us earlier in the week during “The Bo Show” that he expected nothing less than a dogfight. That’s certainly what Stuttgart brought to the land of tall pines and pink tomatoes. However, the orange and black stood firm, verifying why this football program is one of the very best in Arkansas. It’s a culture with a will to win and the presence to handle things when it’s crunch time. Warren would need that spirit and resilience on this night, and boy did they ever deliver.

Stuttgart won the coin toss and elected to receive the opening kickoff. The Jacks set the tone for this thriller early in the first quarter. After two consecutive runs out wide that picked up solid yardage, the Ricebirds of Stuttgart went to the air. A pass over the middle was picked off by Warren’s Tayshawn Johnson at the Warren 40-yard line.

Very quickly Stuttgart had to deal with Cedric Calbert, Warren’s ever-so-talented tailback who still has a few linebackers from around the 8-4A suffering nightmares with him rumbling their direction. Calbert helped the Jacks take their opening offensive possession down to the 19-yard line, but credit to Stuttgart, their defense stood tall and forced a third down interception with under seven minutes remaining in the first quarter. The play resulted in a touchback.

With both teams turning the ball over on their first trip down the field, Warren looked to make another statement defensive stop. And they did. Stuttgart went three and out and were forced to punt.

The Lumberjacks took full advantage. With just nine seconds remaining in the opening quarter, Maddox “Maddog” Lassiter took a snap at quarterback and plowed into pay dirt from three yards out. The extra point was no good. Warren led 6-0 at the end of the first.

Early in the second quarter, Stuttgart’s offensive unit pushed deep into Jack territory. They too sputtered. Forced to try a field goal from about 28 yards out, the kick drifted just right of the goalpost.

Warren put together a really nice drive on their next possession that lasted just over four minutes. It ended with a 26 yard field goal try from Jose Jacinto. Jacinto hammered it through the uprights to extend the Jack lead to 9-0 with 2:42 remaining in the first half.

Stuttgart however turned the game on its head on the following possession. A run wide left looked stopped from the 19-yard line, but a missed couple of tackles and the Ricebird running back was off to the races. He went 81 yards for the score, and after the extra point Stuttgart was right back in the thick of things down just 9-7 at the halftime whistle.

The clock really rolled quickly in the third quarter. After a Warren pass was intercepted, Stuttgart took its first lead of the night with 5:59 remaining in the period through a one yard rush that found the end zone. After the extra point they led the Jacks 14-9.

On Warren’s following possession, things looked a little iffy. Warren stared down a fourth and long situation with 50 seconds left in the quarter, but Jacari Lee hauled in a pass over the middle for 18 yards to keep the drive alive. That possession carried over into the fourth quarter, and with 11:22 remaining in the game Calbert ran in from four yards out to retake the lead at 15-14 Warren. The two-point conversion was no good.

The Ricebirds answered back almost immediately with a 69 yard touchdown run with 11:03 left in the quarter. They led 21-15.

Stuttgart refused to go away however. They found a deep pass on their ensuing offensive possession that took them down to the Warren 28-yard line. The drive was capped off with a nine yard rushing touchdown. They went for two and converted, putting Warren down 29-22.

It began to look like a game in which whoever had the ball last would likely win. With just 2:45 left in the game Stuttgart was presented with a chance to close out the win. Warren faced a fourth and eight situation from the Stuttgart 38 yard-line. The game was on the line. Senior quarterback Riley Cornish looked to pass, felt heavy pressure from a blitz off the left edge. Cornish zipped a line drive pass to Jacari Lee for a huge first down to keep the drive alive. Cornish was hit hard on the play, but hung in there and delivered a strike. With just two minutes remaining the Jacks finished off the drive. Calbert again was the go-to man. He scored from a 14 yard rush. Jacinto nailed the extra point as Warren and Stuttgart found themselves all tied up at 29-29.

With just enough time remaining, Stuttgart had a wonderful opportunity to march down the field, score, and take a huge win over Warren at Jim Hurley, Jr. Stadium as a feather in the cap.

Warren’s defense had other plans. With 1:19 remaining Stuttgart fumbled the football off a left side run. Warren recovered the fumble at the Ricebird 37-yard line.

After Cedric Calbert and the Warren offensive line helped maneuveur the ball to the Stuttgart 16, Jacari Lee took a speed sweep off the left side of the Jack attack. He bolted into the end zone with just 18 seconds remaining. Jacinto hit the extra point to give Warren a 36-29 lead.

That would be the final after Landon Wolfe picked up a sack on the final play of the game to deny Stuttgart a chance at the end zone.

The Lumberjack offense gained 481 yards on the night, 321 of which came on the ground.

Cedric Calbert rushed for 201 yards on 32 carries. He scored two touchdowns on the night and earned AHF Products Lumberjack Player of the Game honors.

Warren’s other two leading rushers included Jacari Lee with 59 yards and a touchdown, and Maddox Lassiter with 41 yards and two touchdowns.

Riley Cornish threw for 159 yards on the night.

Warren is now 11-1 on the season. They get set to host Joe T. Robinson next week in a 4A State semifinal clash that is sure to also be a can’t miss matchup. Joe T. Robinson is coming off a 49-14 win this week over Lamar.