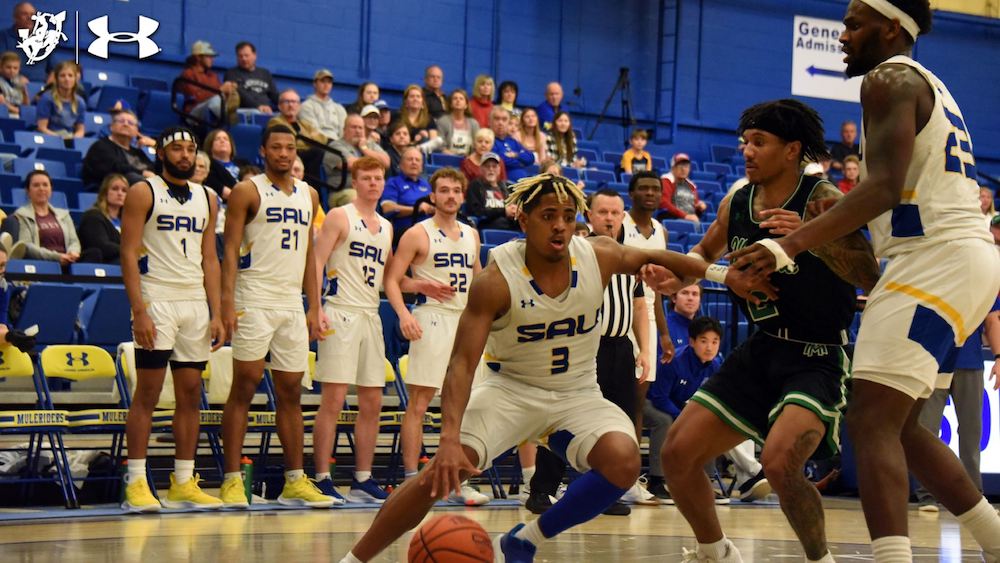 MAGNOLIA, Ark. – March is just around the corner, but for tenth year head coach Andy Sharpe’s Southern Arkansas squad it’s what’s in front of that turn into the Shamrock month that could make all the difference in the Muleriders making a deep run through the madness. SAU enters the final weekend of the regular season having already clinched a spot in the Great American Conference’s upcoming postseason party scheduled for early March from Shawnee, Oklahoma’s FireLake Arena, but the team’s final two contests could help improve its seeding as March looms.

SAU has won six of its past eight which included a five-winning streak. With the squad’s ticket punched for the league tournament, Southern Arkansas remains the only men’s program to make the conference tournament each year since the league’s inception in 2011-12.

On Saturday, Southern Arkansas returns home to battle Arkansas Tech and in the process honor its three senior student-athletes on Senior Day. Forward Devante Brooks, combo Jalen Brooks and point guard Aaron Lucas will take to the W.T. Watson Center hardwood for the final time in what has been illustrious careers for all three players. Tip-off against the Wonder Boys is set for 3 p.m. The Muleriders topped Tech 89-83 on December 18 in Russellville. SAU has won its past three against ATU, but the Wonder Boys lead the GAC series 13-11.

Southern Arkansas is scoring at an average per game clip of 75.3 points, while its 66.8 points allowed are a top 40 mark nationally. The key for the Muleriders this campaign has been rebounding and defense especially along the perimeter. SAU’s 1,031 total rebounds this season are the 15th most in the country and its +6.8 rebound margin ranks 20th in Division II, while its nearly 40 rebounds per game is currently the 25th best output nationally. Of the almost 40 rebounds, an average of 14 have come off of the offensive glass, which is less than only four teams in the country.

The Muleriders three-point field goal defense of 30% ranks 25th in Division II, while its overall FG% defense of 42.7% ranks third in the GAC.

D. Brooks leads the team in scoring at 17.7 points per game. His 291 total rebounds rank fourth nationally, his 11.2 rebounds per game are currently the fifth-most in DII with his 7.69 defensive boards ranking 14th. The GAC’s career leader in double doubles, D. Brooks has delivered the second-most in the country this season with 17 and along with J. Brooks the pair both rank in the top 15 nationally in offensive rebounds per game. J. Brooks’ 3.81 on the offensive glass lead the GAC and slot 8th in the country, while D. Brooks’ 3.50 rebounds per game ranks second in the league and 14th nationally.

In addition to his rebounding prowess, J. Brooks ranks second in the GAC in steals per game with 1.92. His 50 total steals this season are also the second most in the league and a top 35 mark in DII. Lucas follows with 1.62 steals per game. Lucas follows D. Brooks in scoring at 13.8 ppg, J. Brooks adds 12.6 ppg and junior guard Blake Rogers’ 10.2 ppg rounds out double figure scorers for SAU.

Four players with at least 20 makes from three-point range are all shooting over 31% from beyond-the-arc. Lucas has nailed 57 at a 34% success rate, Rogers’ 48 have fallen at a team-best 36% rate, junior guard Tyler Garrett has connected on 25 attempts at 31% and junior guard Victor Irhirhi’s 21 have come at a clip of just under 34%.

Ouachita enters the week having lost six straight games. The Tigers are last in the GAC standings with a 3-17 record and a 5-21 mark overall. The Tigers are scoring at a clip of 68.3 ppg and stand at -6 in scoring margin. Ouachita owns a 43.6% shooting clip, averages 33.7 rebounds per game and has the third-best three-point field goal percentage defense in the conference at 33.1%.

Arkansas Tech stares down the final weekend with an outside shot at making the league tournament. The Wonder Boys are two games back of the eighth and final spot with two games to go. ATU is 6-14 in league play with a 9-17 mark overall. Tech is averaging 70.2 ppg and is just under even in scoring margin at -0.6. The Wonder Boys are one of the league’s top teams in assists ranking second in average per game (14.3), second in total assists (373), and second in assist-to-turnover ratio (1.19). The team’s 36.4% success rate from three ranks third in the GAC.

Live coverage links for both games are available at www.MuleriderAthletics.com.