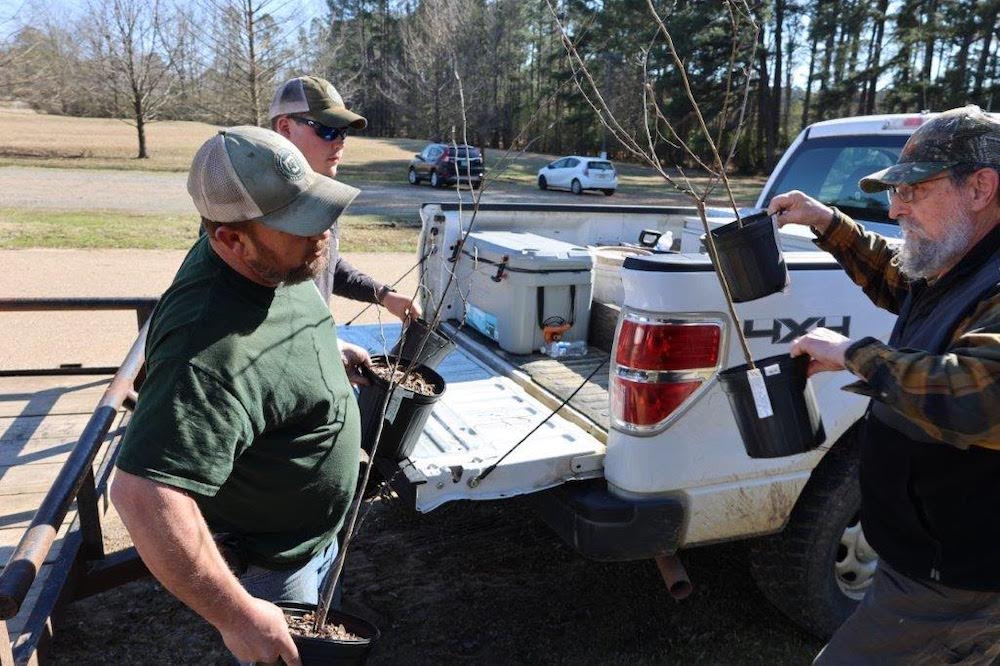 “UAM desires to increase the diversity of woody plant species on its campus to enhance a variety of plants available to students so UAM can use them as an educational tool in our plant identification classes,” he said.

“To increase plant variety, the campus needs to introduce more new species and more plants where we have few individuals,” said Thompson. “This can be done by identifying badly needed species and getting them growing on campus.”

“Finding forest run saplings is how this project got started. I asked Arkansas Forestry Division staff forester, Chandler Barton if they could get the word out to County Foresters that we were looking for certain species and could identify potential plants. Then I or their foresters could dig them up and transplant them to campus.”

Thompson said, “some of the plants are physically available on campus, some are not.” He added, “for those plants not on campus, UAM has to haul our students to them off campus, on field trips, which is an expensive and time-consuming venture.”

“To increase plant variety, the campus needs to introduce more new species and more plants where we have few individuals,” said Thompson. “This can be done by identifying badly needed species and getting them growing on campus.”

Barton and Urban Forestry Coordinator Krissy Kimbro located a nursery with five trees on our “species needed” list. The Forestry Division offered to purchase and donate them to UAM. Thompson said since UAM would need more of these species, UAM purchased a second set of trees.

Thompson will be placing a flag on the stakes next to the plants to make them more visible to mowers.

The species planted on the UAM Campus include:

Thompson (UAM Campus Volunteer) will continue this spring and summer to ensure that the plants are protected from fire ants and deer and add water as needed. Thompson started at the UAM Campus 41 years ago with the School of Forestry in 1980 and retired in 2010. He volunteers on many projects, including UAM Campus Arbor Day and city tree-planting projects.

“UAM needs to thank the Arkansas Forestry Division for donating five species, especially Chandler Barton, for doing the legwork to get the saplings ordered. Chandler and the Monticello Forestry Division staff hauled the trees from the nursery near London, Arkansas to UAM,” said Thompson. Thompson and campus crew member Wade Barnard spent Friday and Monday planting the saplings in locations with suitable habitats and soils.