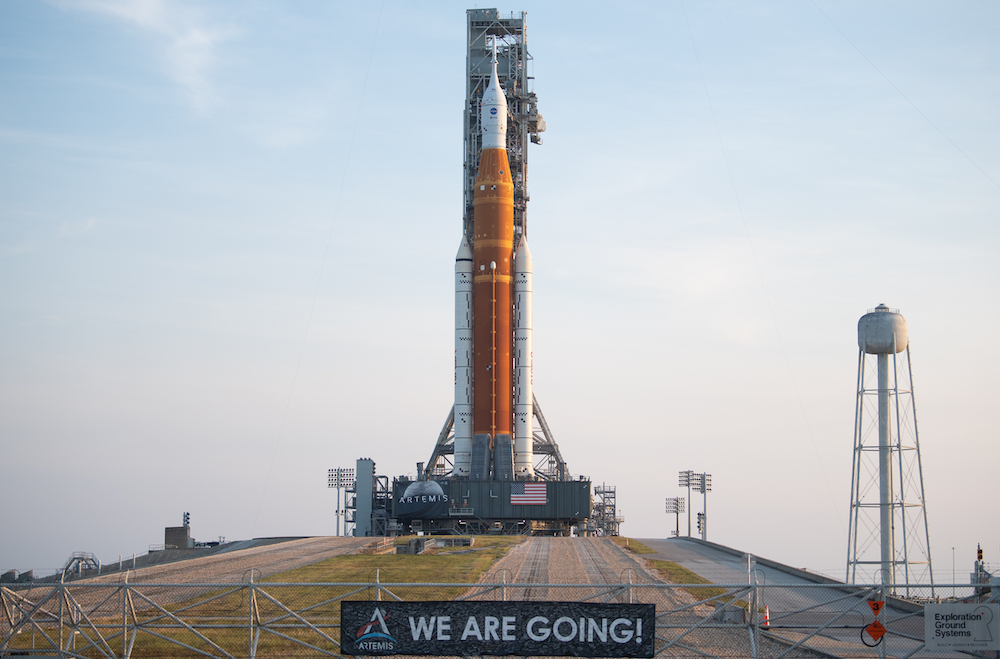 NASA will provide coverage of prelaunch, launch, and postlaunch activities for Artemis I, the first integrated test of NASA’s Orion spacecraft, Space Launch System (SLS) rocket, and the ground systems at the agency’s Kennedy Space Center in Florida. This uncrewed flight test around the Moon will pave the way for a crewed flight test and future human lunar exploration as part of Artemis.

The SLS rocket is targeted to launch during a two-hour window that opens at 8:33 a.m. EDT Monday, Aug. 29, from Launch Pad 39B at Kennedy.

Live coverage of events will air on NASA Television, the NASA app, and the agency’s website, with prelaunch events starting Monday, Aug. 22. The launch countdown will begin Saturday, Aug. 27, at 10:23 a.m.

A live broadcast of the launch also will include celebrity appearances by Jack Black, Chris Evans, and Keke Palmer, as well as a special performance of “The Star-Spangled Banner” by Josh Groban and Herbie Hancock. It also will feature a performance of “America the Beautiful” by The Philadelphia Orchestra and cellist Yo-Yo Ma, conducted by Yannick Nézet-Séguin.

The first in a series of increasingly complex missions, Artemis I will be an uncrewed flight test that will provide a foundation to extend human presence to the Moon and beyond. The mission will demonstrate the performance of the SLS rocket and test Orion’s capabilities over the course of about six weeks as it travels about 40,000 miles beyond the Moon and back to Earth.

A limited number of seats inside the auditorium at Kennedy will be available to on-site journalists on a first-come, first-served basis. The deadline has passed for media accreditation for in-person coverage of this launch. Additional journalists wishing to participate may dial in. To participate by telephone, media must RSVP no later than two hours before the start of each briefing to: ksc-newsroom@mail.nasa.gov. Media and members of the public may also ask questions on social media using #Artemis. Audio only of the news conferences will be carried on the NASA “V” circuits, which may be accessed by dialing 321-867-1220, -1240, -1260 or -7135.

Full launch coverage is as follows. All times are Eastern, all events will air live on NASA TV, and the information is subject to change. Follow NASA’s Artemis blog for updates.

10 a.m. – NASA will hold a prelaunch media briefing on the role of industry in advancing human exploration with the following participants:

2:30 p.m. – NASA will hold a prelaunch media briefing on the agency’s Moon to Mars exploration plans with the following participants:

9 a.m. – NASA will hold a prelaunch media briefing on the status of the countdown with the following participants:

12 a.m.: Coverage begins with commentary of tanking operations to load propellant into the SLS rocket.

6:30 a.m.: Full coverage begins in English. Launch coverage will continue through translunar injection and spacecraft separation, setting Orion on its path to the Moon.

4 p.m.: Coverage of Orion’s first outbound trajectory burn on the way to the Moon. Time of coverage start time is subject to change, based on exact liftoff time.

5:30 p.m.: Coverage of first Earth views from Orion during outbound coast to the Moon.

NASA Television coverage of additional events throughout the mission is available online.

Live NASA TV coverage leading to launch will begin with commentary of tanking operations at 12 a.m. Monday, Aug. 29, followed by launch coverage beginning at 6:30 a.m. Launch coverage will stream on the NASA website, as well as Facebook, Twitch, NASA YouTube, and in 4k on NASA’s UHD channel. For NASA TV downlink information, schedule, and links to streaming video, visit:

On launch day, a “clean feed” will be carried on the NASA TV media channel featuring views of the rocket and audio from a commentator in the Launch Control Center throughout and a single channel of mission audio beginning 15 minutes before launch.

NASA’s broadcast of the launch in Spanish will include interviews with Hispanic members of the mission and live commentary.

The show, which will begin at 7:30 a.m. Monday, Aug. 29, will be available on NASA en español’s YouTube, Twitter, and Facebook accounts, and will continue approximately 15 minutes after liftoff. Mission coverage will then follow on the NASA en español social media channels.

Media and educational institutions interested in sharing the stream of the show can contact María José Viñas at: maria-jose.vinasgarcia@nasa.gov.

Members of the public can register to attend the launch virtually. NASA’s virtual guest program for the mission includes curated launch resources, notifications about related opportunities or changes, and a stamp for the NASA virtual guest passport following a successful launch.

NASA invites the public to join the Artemis I social event on Facebook. Stay up to date on the latest mission activities, interact with Artemis experts in real-time, and watch the live launch broadcast with an interactive chat.

Through Artemis missions, NASA will land the first woman and the first person of color on the Moon, paving the way for a long-term lunar exploration and serving as a steppingstone to send astronauts to Mars.

For more information about the Artemis I mission, visit: