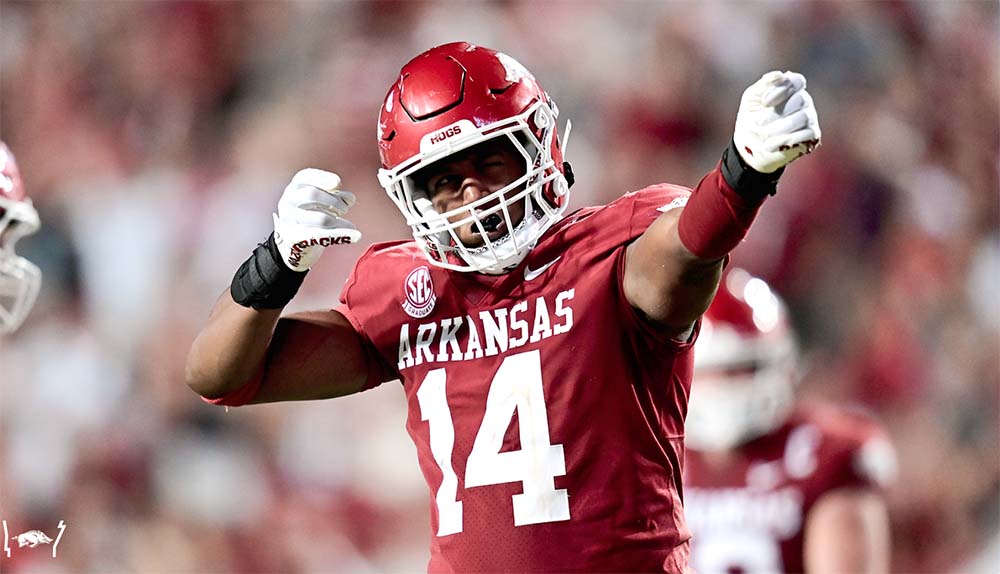 FAYETTEVILLE, Ark. – The Arkansas Razorbacks fended off a potential upset Saturday night, September 17, 2022, defeating the Missouri State Bears by the final of 38-27 at Donald W. Reynolds Razorback Stadium in Fayetteville.

Getting off to a slow start, the Hogs fell behind 17-0 in shocking fashion after multiple turnovers and great offensive play by Missouri State, who just happen to be led by head Coach and former Arkansas boss Bobby Petrino.

Arkansas would final get on the board with 8:25 left in the second quarter. Raheim Sanders completed a nice drive with a three-yard rushing touchdown to cut the score to 17-7 Missouri State.

On their next possession it took Arkansas just two plays to go 85 yards. Jadon Haselwood caught a 38-yard touchdown pass from quarterback KJ Jefferson, as the Razorbacks trailed by only three.

Kicker Cam Little tied things up with 5:36 to in the third quarter with a 27-yard field goal.

However, Missouri State struck back two minutes later courtesy of a Jason Shelley pass to Ty Scott for a 47-yard touchdown. They led 24-17.

The Bears tacked on another three points from a field goal with 12:04 to go in the fourth quarter. That would be their final score of the night.

It was all Arkansas in the remainder of the fourth. Raheim Sanders hauled a shovel pass 73 yards to cut the score to 27-24 with 11:38 to go.

Forcing a punt on the next Missouri State possession, Bryce Stephens came up huge for the Hogs, returning the kick 82 yards for a touchdown. Arkansas led for the first time on the night at 31-27.

They added another score late on with 1:39 to go. KJ Jefferson punched the ball in from a yard out. That gave us the final of 38-27.

Jefferson also went 19 of 31 passing. He threw for 385 yards and two touchdowns.

The Razorbacks are now 3-0 overall. They get set to travel to Arlington, Texas next week, Saturday, September 24 to take on SEC opponent Texas A&M at 6:00 p.m. at AT&T Stadium.