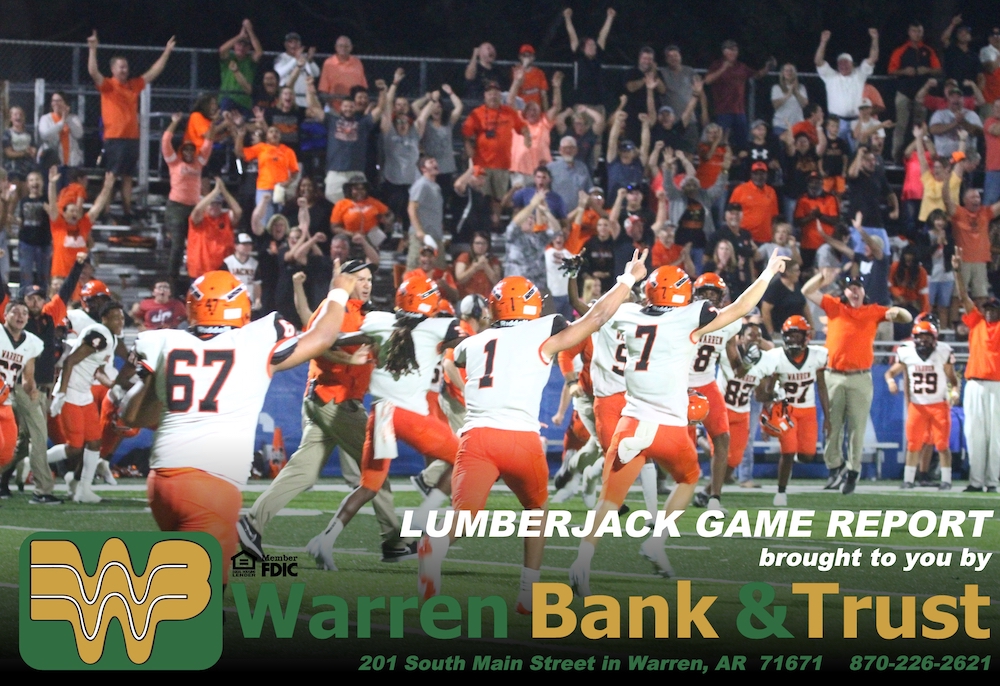 STAR CITY, Ark. – Playing in one of the biggest games in the State of Arkansas this week, on Thursday night, September 15, 2022, in front of a statewide audience on tv, live streams, and radio, on the road in a hostile conference-rival environment, the Warren Lumberjacks put in a performance to remember, defeating the Star City Bulldogs by the final of 28-27 in overtime.

Top photo: The Lumberjacks celebrate after coming from behind to beat 8-4A Conference opponent Star City on the road Thursday, September 15, 2022. Photo by Robert Camp.

This Lumberjack Game Report is brought to you by:

Meanwhile, Star City brought a 3-0 record into the game, including an impressive 45-35 win over Stuttgart in week one. Expectations were high for the Bulldogs, looking to erase nearly two decades of struggles vs. the orange and black.

Star City struck early in the first quarter, intercepting a pass and returning it 41-yards for a touchdown.

The Bulldogs doubled their lead just seconds into the second quarter off a speed sweep to the right side, designed for the tailback to drop back and pass. The completion put Warren on their heels.

Warren power back Landon Wolfe did the bulk of the heavy work on the Jacks’ first drive of the second period, putting together a couple of positive runs of five and nine yards. With 10:42 left in the quarter, Warren lined up with three split receivers. Neond’dre Thomas was wide left. Quarterback Treylon Jackson dropped back on second down and one. He took a slight glance toward Wolfe who had drifted into the left flat, before calmly launching a 43-yard bomb to Thomas on a straight go route. Thomas caught the ball in stride at the 12-yard line, continuing into the end zone for a touchdown. After the Jose Jacinto extra point, Warren trailed 14-7.

Midway through the quarter Star City answered Warren’s score with another of their own. Out of the flexbone, Austin Wilkerson hauled in a quick slant off the left and carried it 58-yards for the score, extending the Star City lead to 14 points again. Star City took the 21-7 lead into the halftime break.

Warren received the opening kickoff of the third quarter. Jaline Lee set Warren up with great field position at the Star City 49-yard-line. The Jacks would convert a fourth and three play just a minute or so later, keeping the drive alive. With 8:57 to go in the period and staring down a fourth and long from the 39-yard line, Jackson scrambled to his right, and under intense pressure from the Bulldogs, lofted a deep ball into the end zone, which nestled its way again into the hands of Thomas for six. Jacinto converted the PAT to cut the deficit to 21-14.

Warren’s defense played lights out the next three Star City possessions of the third quarter, holding the Bulldogs scoreless. That terrific defensive play continued into the fourth.

With just under six minutes left in the ballgame, Maddox Lassiter lined up at quarterback. The senior delivered a laser over the middle to Jalin Lee on a post route for a touchdown. Jacinto knocked through the extra point to tie things up at 21-21.

Star City attempted a 35-yard field goal with 1:19 to go, but Andres Heredia’s kick clamored off the crossbar and back towards the field of play, coming up just short and sending the game to overtime.

The Jacks wasted little time with their first possession in the extra period. “Maddog” Maddox Lassiter looked to pass on third and goal from the 13-yard-line. Nothing was open as he stepped up in the pocket. Seeing nothing available he scrambled to his right and delivered a rope while on the run to Antonio Jordan, who had found some space near the visitor’s side corner. Jordan made the catch and score. Jacinto added the extra point to make it 28-21 Warren.

An offside penalty set Star City up with a first down and goal from the 5 on their possession of the first overtime. Bulldog quarterback Mason Taylor needed just one play to find the end zone, powering his way in on the ground.

Star City head coach Chris Vereen elected to go for a two-point conversion and the win instead of trying to tie things up with an extra point kick. The Bulldogs lined up with Taylor at quarterback, flanked to the left by his tailback, with an up back, CJ Turner, behind the left tackle. Taylor took the snap and tried to go off the back of Turner to the left, but Warren’s Jaline Lee immediately blitzed off that side, blowing up the play. Lee turned Taylor back inside, where a host of Lumberjacks, including Weston Gavin, Bryson Harris, and Maddox Lassiter dropped him behind the line of scrimmage for the game-winning-play.

Warren found points through the air four times on the night. Treylon Jackson threw for 131 yards, going seven of 15 with two touchdown passes.

On the other side of Warren’s dual quarterback system, Maddox Lassiter went two of seven. However, both of his completions were clutch. The senior threw for 30 yards and two touchdowns.

Jackson also led Warren in the ground attack. He carried the ball twelve times for 71 yards.

Lassiter was Warren’s second-leading rusher with nine carries for 53 yards.

Landon Wolfe garnered 28 yards on the ground, while Tayshawn Johnson picked up five.

Lassiter led the team with an impressive 15 tackles.

Junior Neeyo Harding also had a big night with eight tackles to his credit.

Warren gets set next to face McGehee, once again on the road. That game kicks off at 7:00 p.m., Friday, September 23.