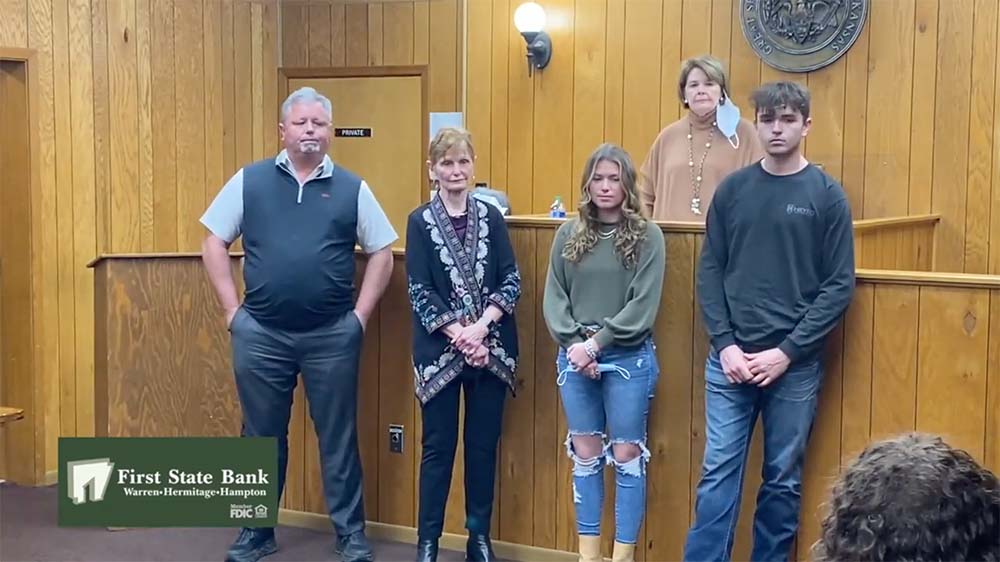 Warren, Arkansas – Meeting for the first City Council meeting of 2022 the Warren City Council conducted several items of routine business and dispensed with the meeting in just over 30 minutes. Five of the six council members were present. Mayor Pennington presided.

City Clerk Helen Boswell submitted the statement of revenues and expenditures and other appropriate financial information. The financial report was approved 5-0. The City Clerk told the Council that local sales tax revenues remain very strong. The sales tax received by the city in December 2021 was as follows:

Mayor Pennington nominated James Hooper to a five year term on the City’s Fair Housing Commission. The Council confirmed the appointment. It was a reappointment.

The Water and Sewer Commission, in accordance with state law, nominated Boyce Hamlet to an eight year appointment to the Commission. The council confirmed the appointment This was also a reappointment.

Resolution A-666 was adopted honoring former Mayor John B. Frazer, Jr. for his twelve years of service as Mayor of Warren from 1975-1986. His many other contributions to the community was also mentioned. Present for the approval of the Resolution was his wife Maribeth Frazer, his son Thomas Frazer and two of his grandchildren, Rivers Frazer and Race Frazer. Several other family members were unable to attend.

Two people addressed the Council. Ms. White talked about a program to help young mothers and Mr. Willie Thomas of 1120 Boyd Street asked the Council to help with clean-up efforts in the Boyd Street area, such as trash in ditches. Mayor Pennington stated some work had been recently completed but more is needed.

Police Chief Shawn Hildreth gave his monthly report and indicated while a new police officer has been hired, he is still in need of another dispatcher.

Acting Fire Chief Larry Hayes informed the Council that the department made 12 calls in December 2021, of which four were toned out fires requiring volunteers to be called out. He also indicated the new fire engine has
been ordered. Mayor Pennington announced that the newly hired fire chief will be on the job next week. He is being delayed due to his wife testing positive for covid. They are moving to Warren. It was reported that three new volunteer firemen have been hired. The Council then voted to approve the payment of firefighter dues for 32 firemen at a cost of $20 each.

Newly hired Building Official/Sanitation Manager Rob Johnson submitted the December, 2021 report. He stated he had been on the job just two weeks and has been acquainting himself with the staff and status of the office. He told the Council he was happy to be back, having served in the same capacity several years earlier. Mr. Johnson told the Council there will be a more detailed report on condemned properties presented next month.

Street Foreman Monty Hearnsberger gave his report and the Street Committee recommended that a speed bump, previously approved by the Council, be removed on Cedar Street between Chestnut and Bradley. Based upon citizen feedback, the Committee felt this was appropriate. Other speed bumps recently installed will be maintained. The Council voted four in favor with one abstention to approve the committee recommendation. Street Chairman Emily Moseley reported that the street hearing to consider paving for 2022 will be held February 17, 2022 at 5:00 p.m.
in the Municipal Courtroom.

Parks and Recreation Director Kyle Wagnon gave the Parks and Rec report. He stated plans are proceeding to have the Softball/Baseball complex ready for high school games in February. In a discussion after the meeting, Mr. Wagnon told SRC work is proceeding on construction of the new pistol and rifle range at the City’s shooting complex.

Reports of all City boards and commissions that met in December 2021 were reviewed and the Council voted to pay all December 2021 bills.

Mayor Pennington announced the Arkansas Municipal League Virtual Winter Conference is planned for January 19-21. She also stated the City will close the Municipal Building January
17, 2022 in honor of Dr. Martin Luther King, Jr. There will be no garbage pickup in the City on the January 17.

The February 2022 council meeting will be conducted February 14 and the agenda meeting February 10 at 7:00 a.m.