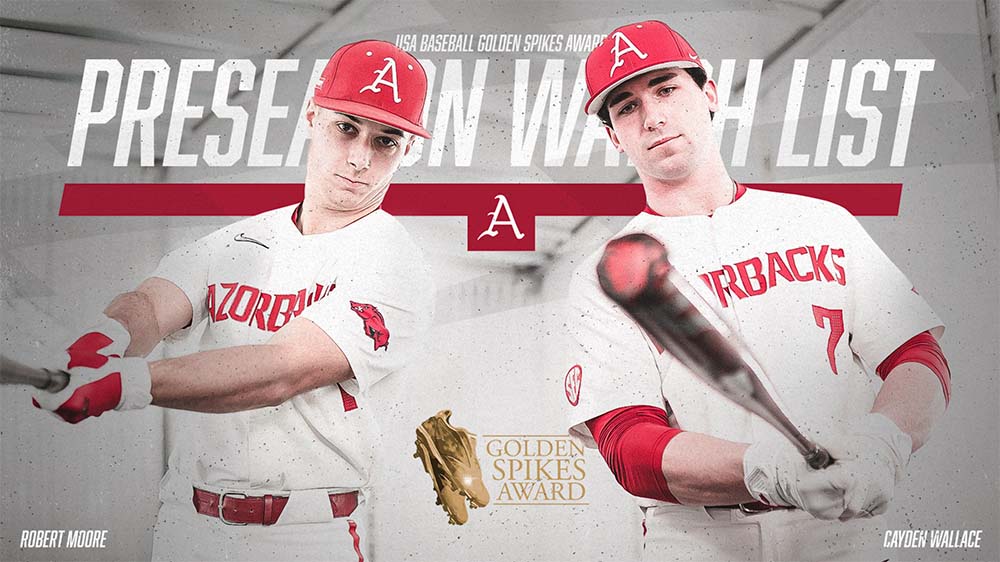 The 2022 preseason watch list, which was announced by USA Baseball on Tuesday, features 55 of the nation’s top amateur players from high school and college baseball. The Golden Spikes Award Advisory Board will maintain a rolling list of players, allowing athletes to play themselves into consideration for the award throughout the season.

Moore enters the 2022 season as a consensus preseason All-American and as a preseason All-SEC First Team honoree after slashing .283/.384/.558 with a team-leading 16 home runs and 53 runs batted in last year. In his first full season with the Razorbacks, the Leawood, Kan., native established himself as one of college baseball’s premier middle infielders, earning All-SEC, Newcomer All-SEC and SEC All-Defensive praise.

Wallace, meanwhile, burst onto the scene as a true freshman in 2021. The Greenbrier, Ark., native became the 24th Razorback in program history to earn Freshman All-America status, slashing .279/.369/.500 with 14 homers and 44 RBI on the year. One of the Hogs’ three team captains, Wallace enters the 2022 campaign as a preseason All-SEC Second Team honoree at third base.

Arkansas, one of eight programs with multiple student-athletes on this year’s preseason watch list, boasts a storied history involving the Golden Spikes Award. Former Razorbacks Andrew Benintendi and Kevin Kopps each won the award as the best amateur baseball player in the country in 2015 and 2021, respectively, making Arkansas just one of five schools, along with Florida State (4), Arizona State (3), Cal State Fullerton (3) and San Diego State (2), to have multiple Golden Spikes Award winners.

Head coach Dave Van Horn and the Hogs open the 2022 campaign – their 100th season of competition – against Illinois State this weekend at Baum-Walker Stadium. First pitch in the season opener set for 3 p.m. Friday, Feb. 18, on SEC Network+.