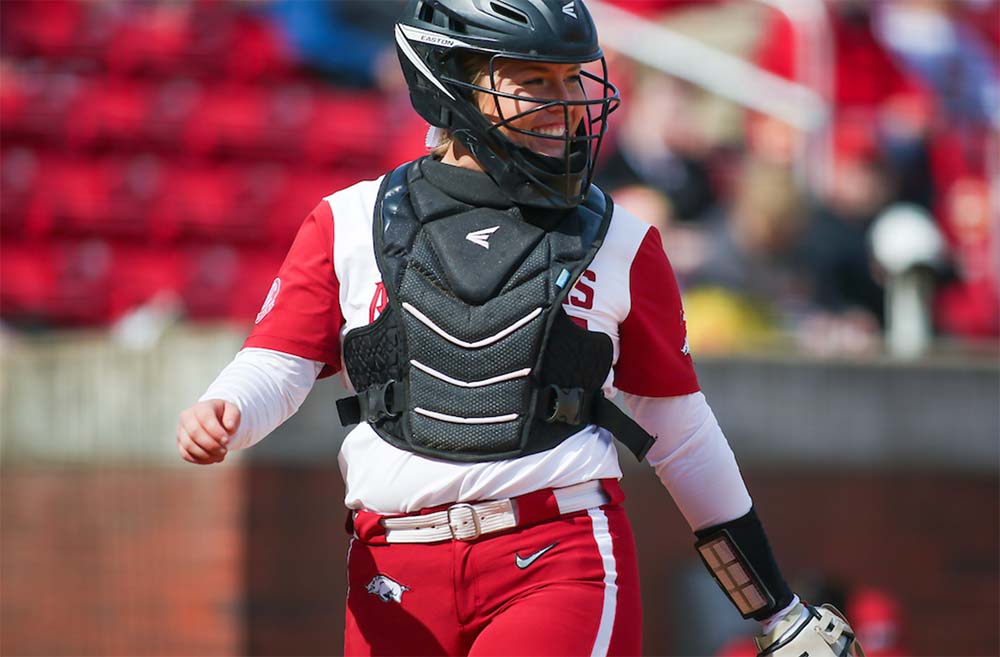 FAYETTEVILLE, Ark. – No. 10 Arkansas secured its fourth win of the Razorback Invitational after piecing together 13 hits to down Western Illinois 13-3 (5 inn.) Sunday at Bogle Park. The Razorbacks fell to Illinois, 8-6, in their first game of the day.

Senior Taylor Ellsworth ignited Arkansas offensively against the Leathernecks, going 3-for-4 with three RBI, two runs scored, a double and a three-run blast that towered the left field wall in the fourth. Senior Danielle Gibson provided another offensive spark for the Razorbacks after going 2-for-3 with two RBI and a double. Senior Hannah McEwen also put together a noteworthy game at the plate with a 2-for-3 performance that included three runs scored, an RBI and a double while drawing a walk. Senior KB Sides exhibited her offensive prowess after recording three stolen bases while going 1-for-2 at the plate and drawing two walks at the leadoff spot.

Senior Chenise Delce notched her second win of the year after getting the nod in the circle against Western Illinois. In three innings of work, the Oklahoma City, Okla., native amassed four strikeouts and walked zero. Sophomore Lauren Howell Tossed the final two innings, giving up zero hits and striking out two.

How It Happened
McEwen led Arkansas offensively against the Illini after connecting on two hits, including a homer to center in the third, with two runs and an RBI. Sides stuffed her stat line after going 1-for-3 with a home run, three stolen bases, two runs scored while forcing a walk. Junior Sam Torres totaled two hits in the eight-spot. Ellsworth, Gibson and Gammill also registered one hit a piece.

Sophomore Jenna Bloom started on the mound for the Razorbacks in game one. In three innings, Bloom gave up two runs on five hits and gave up just one extra base hit. Senior Mary Haff threw the final four innings and posted five strikeouts.

In game two, Western Illinois jumped on the board in the top of the first to take a 2-0 advantage. Arkansas answered back in the bottom of the inning. First, Sides walked and then continued doing what she does best by stealing second. Ellsworth’s single through the left side advanced Sides to third. Gibson stepped up to the plate, launching an RBI double to left and moving Ellsworth to third. Gammill continued the inning with a walk to load the bases. Torres followed with a two-RBI double up the middle to grant Arkansas with a 3-2 lead. Audrie LaValley’s sacrifice fly to center sent Gammill home for a 4-2 Razorback lead to close the first frame.

Arkansas did work in the top half of the first, notching a quick 1-2-3 inning. Sides began by singling to short and then stealing second a few pitches later. McEwen followed with a walk to put runners on first and second with no outs. Sides then stole third and continued home on an Illini throwing error, which sent McEwen to second. Ellsworth doubled to left to slide McEwen to third before a passed ball plated McEwen to move the lead to 5-2.

Western Illinois responded with a run in the top of the third.

A LaValley walk before a Delce single to short put a runner in scoring position with no outs. Sides walked to load the bases. McEwen continued her hot streak with a hard-hit single to short that plated LaValley. A fielder’s choice on Ellsworth’s ball to shallow left pushed Sockey across home for a 7-2 lead. Gibson’s single through the right side gave Arkansas another run in the third.

Freshman Kacie Hoffman launched a solo shot to center to begin the fourth. Following Hoffman, LaValley singled to right center. McEwen kept the inning alive with a two-out double down the right field line. Soon after, Ellsworth sent a three-run home run to the parking lot give Arkansas its final runs of the day and secure a 13-3, five inning victory.